Somerville College is home to the Vera Brittain Archive. Just as WWI was breaking out, Brittain won an exhibition to Somerville to read English. However, at the end of her first year she decided that her duty lay in serving her country, and she spent the remainder of the war nursing in London, Malta and France. She returned to Somerville in 1919, changing course to Modern History in an attempt to understand the origins of the conflict that had claimed the lives of her fiancé, her brother and two close friends. In 1933 she published Testament of Youth, a record of a lost generation - one of the first accounts of the Great War from a woman's point of view, and likely the most influential. She wrote 29 books in all and was a prolific lecturer and journalist, who devoted much of her energy to the causes of peace, socialism and feminism. In 1999, a collection of Brittain's letters and a large amount of research material used in writing her biography were given to Somerville Library by her biographers.  The papers are now housed in the Vera Brittain Room in the College archives, where they may be consulted by appointment.

The Bodleian holds several monographs shedding light on the significantly changed female experience of employment during the war, including Our Girls, their work for the war (Caine, 1917), Lloyd George's Munition Girls (Cosens, 1916), Munition Lasses (Foxwell, 1917) and The Woman's Part: a recrod of munitions work (Yates, 1918).

The Wellcome Library (London) holds a volume of material providing personal narratives of female work in the medical field during WWI. This includes the unpublished memoir and diaries of Sister Mary Knocker, who served as a nurse during the conflict. The papers incorporate photos and memorabilia, and relate to her nursing training and extensive service on the Western Front.

The National Archives 100 website allows researchers to explore a collection of digitised WWI records, including letters, diaries, maps and photographs. Among the resources available, there are guides to collections which focus on women's role in the war. Two such guides highlight records pertaining to the Women's Royal Naval Division and Army Nurses. 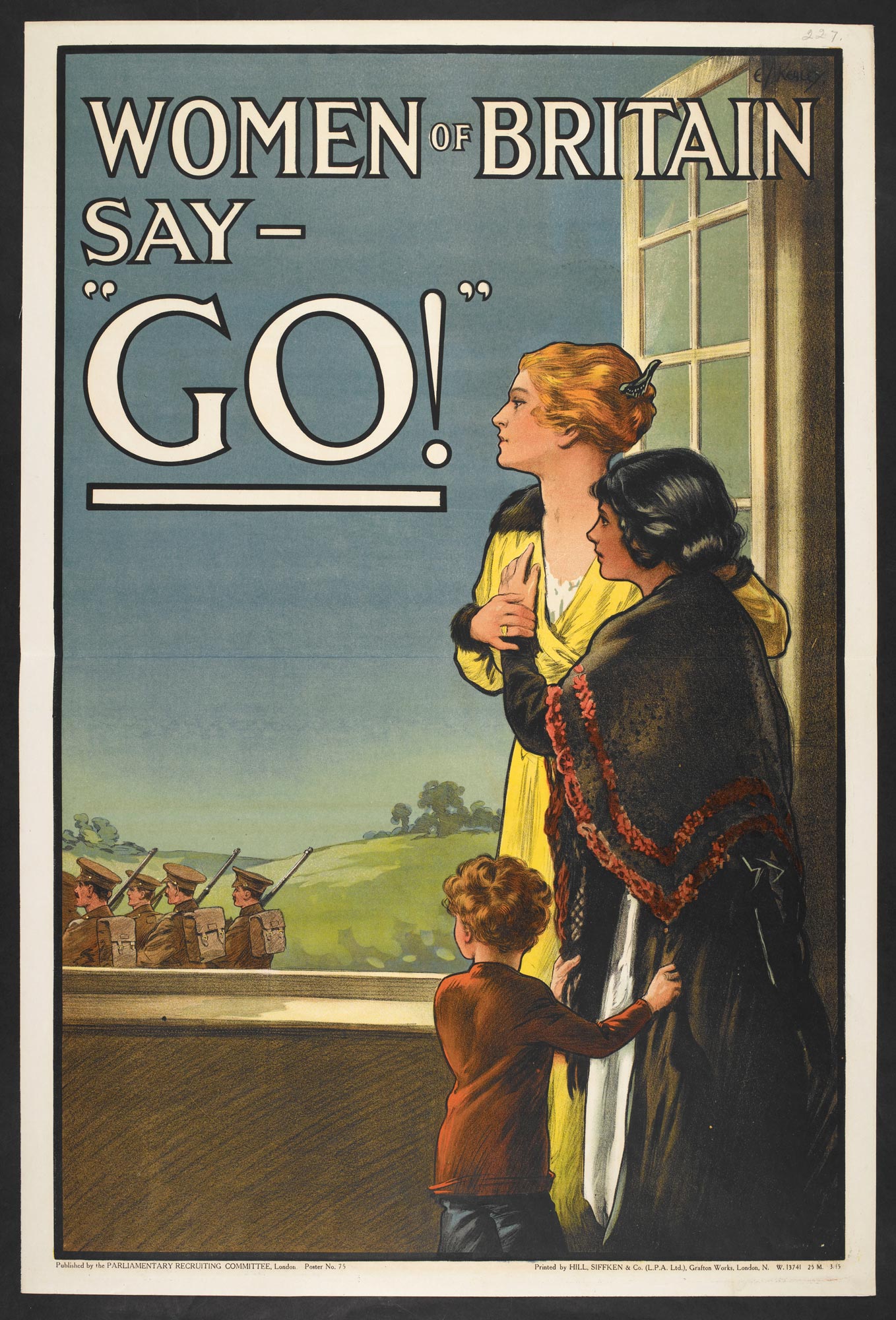 During WWI, posters were one of the most important means of spreading propaganda. Nations were personified by women, such as Britannia: epitomes of morality, virtue, innocence and justice. This example, an appeal to Britain’s women to ensure their men enlist, complements the male action required by Kitchener’s ‘Your country needs you!’ poster. The home meant security, to be protected from German aggression at all costs. Those who refused to do so would be spurned by sweethearts, and face accusation and recrimination. However, women’s standard roles were being blurred by wartime demands. In propaganda they are portrayed as gentle, vulnerable home-makers, both objects of men’s affections and victims of barbarous enemy acts – and yet also as resilient, active participants in the war effort. They work at the front, and go to factories making munitions; active roles, compromising traditionally expected behaviour of future caring mothers. Suffragettes seized on this to argue that women active in the war effort were more worthy of citizenship than male pacifists or conscientious objectors. New gender roles seemed possible. The reality proved more complex than any imagined, but the status of women had fundamentally changed.

The IWM Sound Archive holds over 33,000 recordings relating to conflict since 1914. Among them are several interviews with women active in the war effort, including Voluntary Aid Detachment (VAD) workers. The Voluntary Aid Detachment (VAD), two-thirds of which were women and girls, worked in hospitals and served as ambulance drivers and cooks. VADs served near the Western Front and in Mesopotamia and Gallipoli, with hospitals also opened in many British towns. Later, they were sent to the Eastern Front, providing an invaluable source of aid during the war. As revealed by the excerpt below, their daily duties could be hugely varied and demanding, both physically and emotionally.

Special Collections at the University of Birmingham are in possession of the manuscript diary of Gwen Wells, a young woman working and living in London towards the end of WWI. Whilst her diary touches on wartime employment, Wells' recollections are set aside from many others by their extensive and candid descriptions of everyday life in a city impacted by war. To this end, diary entries regularly touch on air raids and bomb damage, thus providing a more complete insight from a female perspective than is often afforded.

The Women’s Library (London School of Economics) documents all aspects of women’s lives, with particular emphasis on the great political, economic and social changes of the past 150 years. Collections include many resources pertinent to WWI, with over 60,000 books and pamphlets and 3,000 periodical titles held on site. In addition, the archive and museum collections include diaries and personal correspondence, photographs, posters, banners, textiles and ceramics.

Those examining the impact of war on female political cosnciousness may wish to consult the ‘Autograph Letter Collection: Militant Suffragettes’, which highlights that when WWI broke out suffrage organisations across the spectrum of opinion suspended their political activities and transferred their efforts to war work. It also contains information regarding demonstrations in support of the war, which encouraged women to replace men in the workplace, as well as letters to, from and about females who were in the past traditionally perceived to be militant suffragettes. The majority of these women abandoned such activities in 1914, in order to support the war effort. Evidence can also be found of the hope that wartime activity gave women for permanent changes in their involvement in social, political and economic life.

In addition, the LSE Digital Library contains items of interest; at present, for example, the 'World War One at LSE: a common cause' exhibition features a selection of images relating to the conflict, including newspaper and diary excerpts, cartoons and photographs.

The Gerritsen Collection, a ProQuest database available via SOLO, comprises a selection of documents charting women's history. It provides access to some primary sources otherwise only located in a few rare book rooms, and includes the full text of many books and periodicals in circulation during WWI. Amongst these are searchable issues of International Women's News, the publication of the International Alliance of Women which highlighted wartime issues pertinent to females. Multiple articles within this periodical are devoted to debating the 'Equal Pay for Equal Work' slogan, which was increasingly used as women stepped into the employment gaps left by men. Notably, the Gerritsen Collection also provides access to anti-feminist periodicals, thereby revealing the views of those opposed to extending female rights and privileges on the basis of their wartime contributions.