The British Library holds a substantial amount of material pertinent to prisoners of war during WWI, selections of which have been digitised for their World War One website. Most prominent are the Cave Papers, which contain both personal and official documents. Among them is a document titled 'Memorandum for War Cabinet', a summary of reprisals taken by British and German governments during the war. In order to regain British prisoners or to improve their treatment the government threatened reprisals against German prisoners of war. This was not altogether successful as the German government would respond by threatening to exact similar or more severe reprisals against the British prisoners they held. This memorandum lists a number of examples of the exchanges of threats between Britain and Germany, most of which ended without success for either country.

Also included are photos of accommodation for British prisoners of war, reports on war crimes, and minutes from the Interdepartmental Committees at the Home Office concerning prisoners of war. Additionally, researchers may be interested to view a further memorandum by the British government, sent to the Netherlands Minister and German authorities regarding the treatment of prisoners. The report describes how a ‘reign of terror’ was inflicted on British Officers held by General von Hanisch, of the German Xth Army. The British argue that conditions in the camps at Clausthal, Holzminden and Strohen did not match the levels set by the Geneva and Hague Conventions of 1906 and 1907. They complain about the lack of facilities for exercise and recreation, the delay in receiving letters and parcels, the attitudes of the staff and the harsh treatment received including the bayoneting of officers. The reply from the Germans firmly rejects these claims and argues that in some cases force was necessary to retain order and prevent escapes. In turn, they accuse the British of mistreating their own prisoners of war. 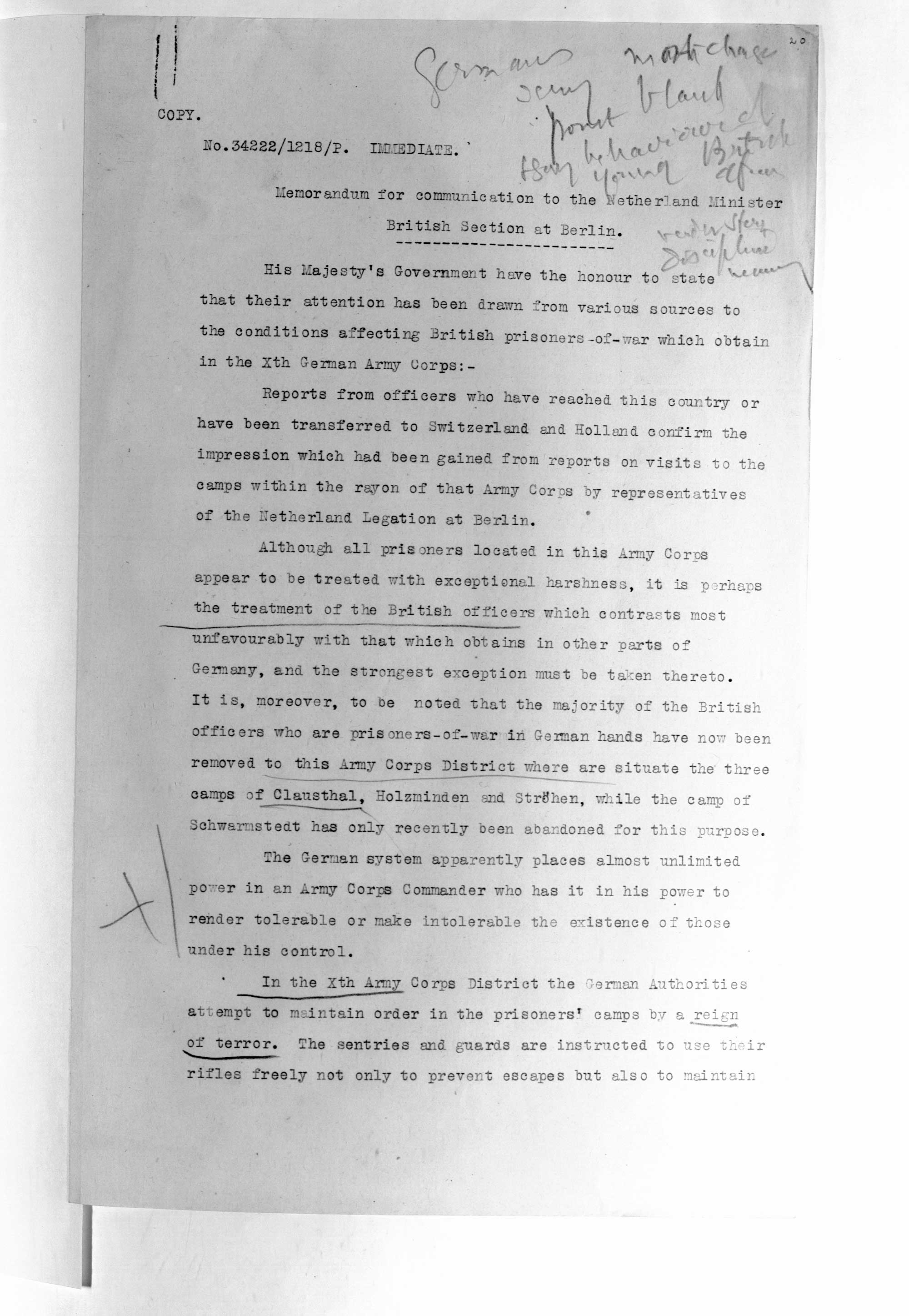 Prisoners of War and Spies during WWI 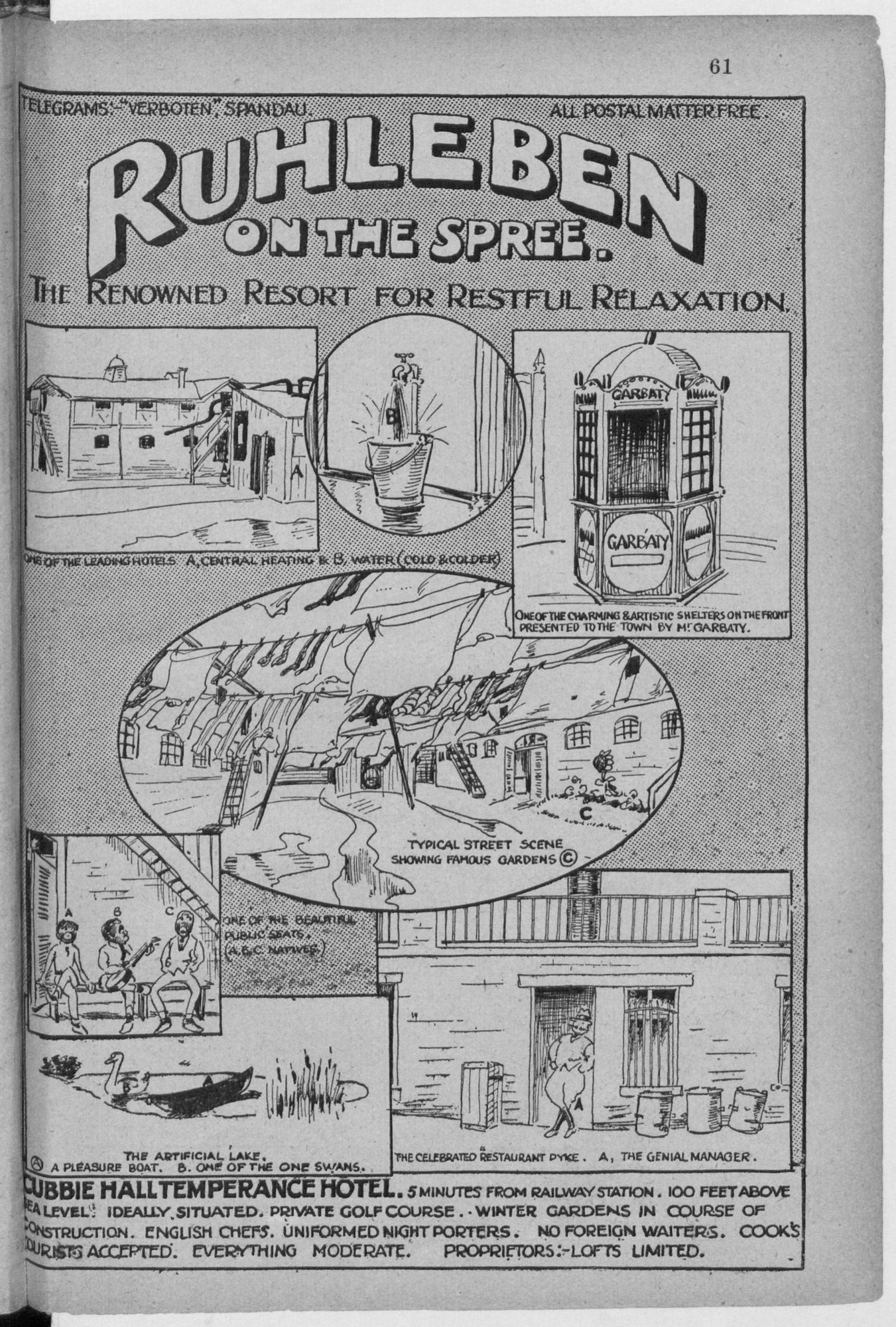 The Ruhleben Camp Magazine (formerly known as In Ruhleben Camp), was produced by British prisoners of war, and provides an illustration of the good humour present within Spandau prison camp. Whilst there were several less-ambitious ‘trench magazines’ in ciculation, this publication certainly wasn’t one of them, gaining notoriety throughout Europe. The prisoners at Spandau were strictly civilians who happened to live in Germany, or survivors from fishing boats that were sunk by the German Navy when the conflict broke out.  At least 100,000 non-soldiers were interned throughout the country, with this famous community numbering around 5,500.  Trying their best to enjoy their enforced accommodation, the Ruhleben men (there were no women present) formed their own entertainment groups with drama, football, and music. However, despite the intended jollity and public relations to the outside world, there were attempted escapes, which sheds greater light on the realities of imprisonment. Several issues of The Ruhleben Camp Magazine can be consulted locally, providing an interesting perspective on both the perceived and actual experiences of prisoners of war. 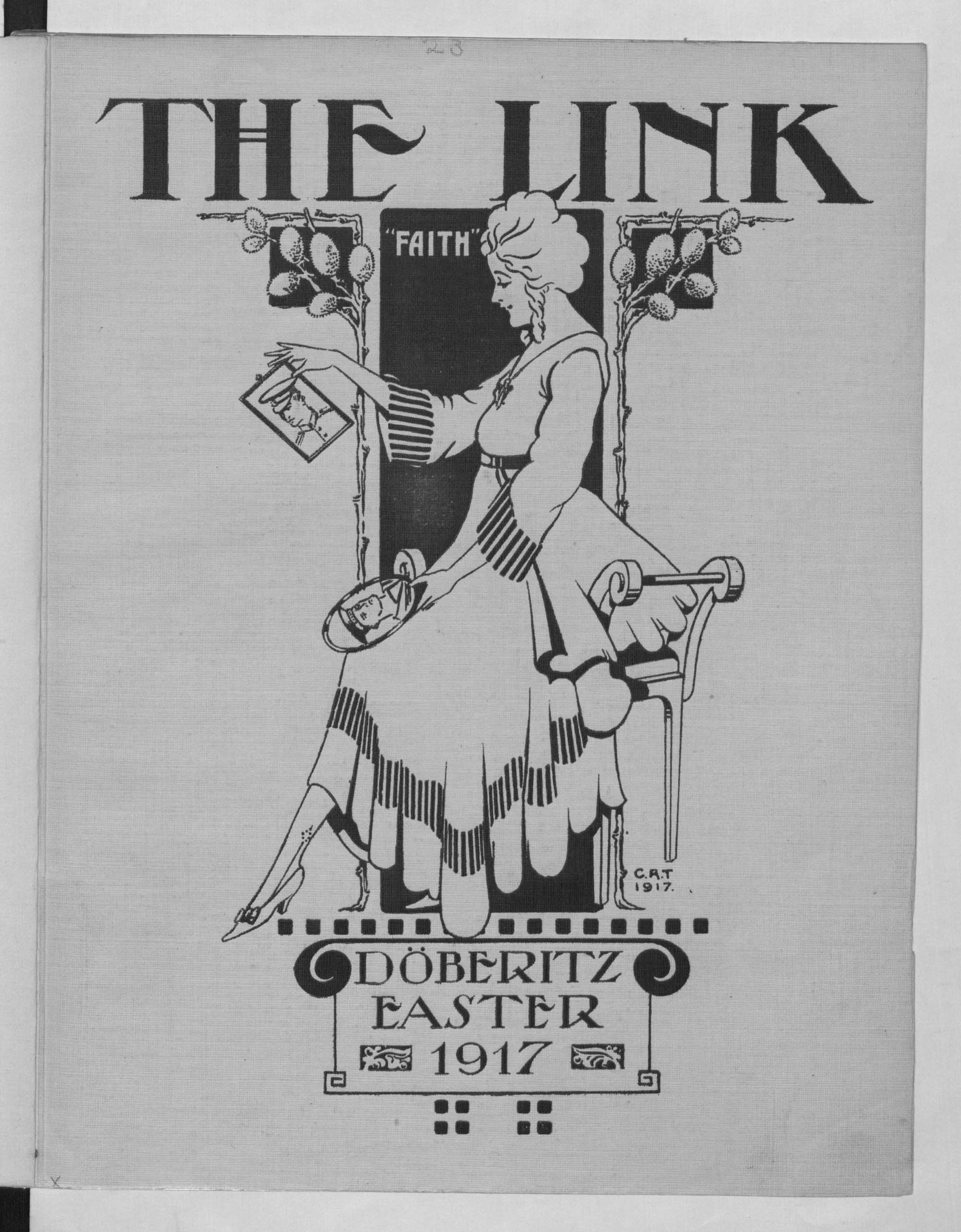 The Link, another publication by British prisoners of war, can be consulted at the Bodleian. It is the work of prisoners interned at Döberitz, Germany, and provides a further example of attitudes (or apparent attitudes) towards camp life. Although dedicated to ‘our friends and benefactors’, the book’s anecdotes and in-jokes about living conditions and well-known characters in Döberitz suggest that its true audience was the internees themselves. The introductory essay about life in ‘Doberidge’ sets the tone of upbeat humour tinged with occasional melancholy. Curiously, there is little mention of the Germans either as prison guards or as the wartime enemy, and the book’s military anecdotes focus more on peacetime service in the colonies than on the war currently being waged. Excerpts from the book can also be viewed online, within the British Library's World War One resource collection.

Researchers of the Security Service during WWI may wish to consult The National Archives at Kew. The series KV 2 contains selected files on suspected spies and double agents, renegades and suspected renegades (including P.G. Wodehouse), German intelligence (Abwehr) officers, Japanese intelligence agents, communist sympathisers and other groups in which the Security Service took an interest (including pacifist and anti-conscription groups). Whilst much of this material must be consulted on site, it is worth noting that digital images of selected files are available to download.

In addition, the National Archives are currently making over 150 top secret MI5 files available online for the first time. The files concern organisations and individuals involved in espionage or under surveillance during WWI. They contain a wealth of material, including interrogation reports, letters, postcards and photos relating to individuals and groups under surveillance. Information is included concerning famous individuals such as Edith Cavell, Mata Hari, Arthur Ransome and Ezra Pound. The files also contain intelligence reports and surveillance details of organisations such as the Bolshevik Party, British Communist Party, and even the Boy Scout Association. In addition, there are files concerning influential political figures including known fascists, communists and Russian leaders such as Trotsky and Lenin. They can be located via the National Archives First World War 100 website.

POWs as a force for recruitment, Cymru 1914 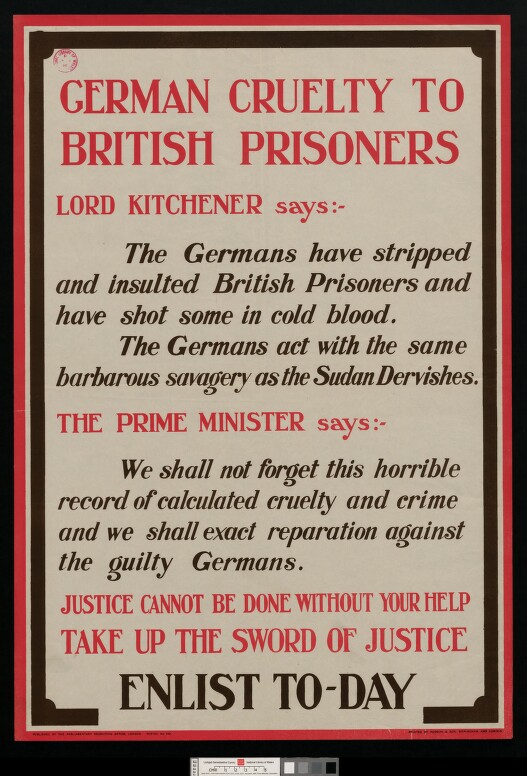