Origins of the War

The National Archives hold the official UK government records of WWI. This includes a vast collection of letters, diaries, maps and photographs. Whilst the majority of these are to be consulted on site, some have been digitised and can be viewed online.

Prominent among those relevant to the origins of WWI are the Cabinet Papers, which contain documents concerning decisions and discussions made prior to the outbreak of war. Readers may wish to search the Cabinet Papers website, which highlights some of the key resources held at Kew, providing further information regarding access to materials.

Among several digitised resources pertinent to the outbreak of WWI, The British Library provides access to Synopsis of our Obligations to our Allies and Others (1918). This is a secret memorandum prepared in the British Foreign Office, providing a summary of the pledges given by Great Britain to various foreign Powers and Nationalities. The synopsis outlines the complex web of international obligations Britain had entered into, listing her obligations to France, Italy, Russia, Romania, Japan, China, Belgium, Serbia, Portugal, Greece, Sweden, Holland, Switzerland, Poland, Yugoslavia, Czechoslovakia, Albania, Armenia, Persia and Afghanistan, as well as to the King of the Hejaz and the Jewish people. The memorandum also includes a table comparing the different war aims of the major powers, showing how far they agreed with President Wilson’s points for discussion.

The British Library holds the personal diaries of George Allardice Riddell, an influential newspaper proprietor during WWI. Riddell kept close links with the government in order to discover whether Britain would enter the war, and perceived that in 1914 it was split into several contentious factions. Researchers may gain an interesting perspective on the origins of the war from Riddell's diaries, which provide a candid interpretation of the tumultuous political climate following the assassination of the Archduke Franz Ferdinand. Selected excerpts may be viewed online.

Key among the tensions contributing to the outbreak of the First World War were heavily contested European frontiers. The Bodleian Map Room contains a wealth of original maps pertinent to this period, allowing readers to gain an appreciation of the territorial wrangles at play. As illustrated by the example below, the collection provides valuable geographical insight to the outbreak of war: 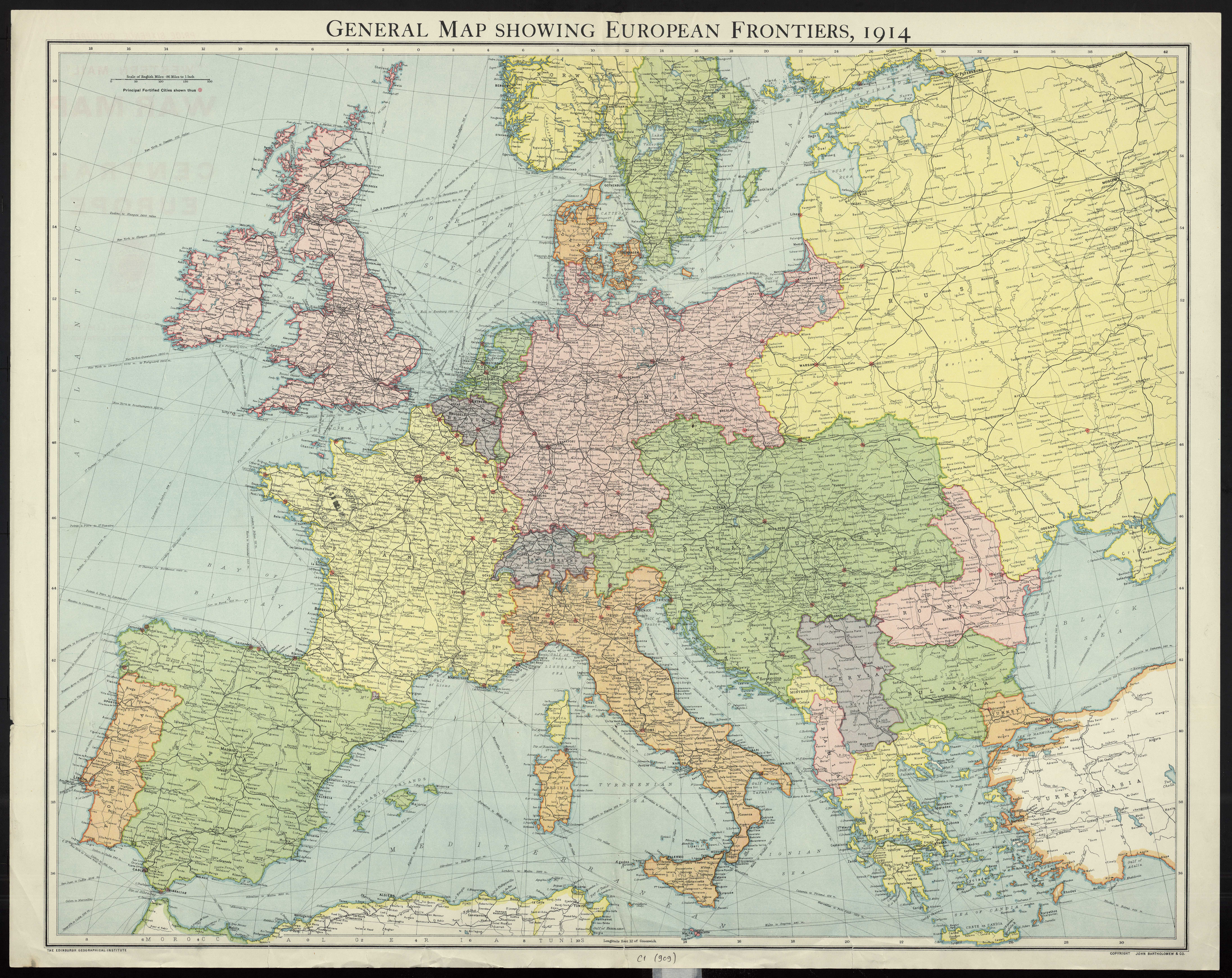 Readers can also consult four 1:10,000 trench maps, recon maps, bespoke maps for military planning, and a series of maps rapidly produced for real-time situational awareness of operations in progress. In addition to the 1:10,000 maps, the Bodleian owns several hundred 1:20,000 and 1:40,000 documents. The majority of this material dates from 1916-1918, as relatively little mapping was undertaken in the earlier years of WWI. It's also worth noting that the Bodleian holds a copy of Topography of Armageddon (Chasseaud, 1991), probably the definitive work on the history of WWI mapping.

The Documents on British Policy Overseas database is a collaborative project between ProQuest and the Foreign and Commonwealth Office. It's a fully searchable collection of primary source documents from Britain's Foreign and Commonwealth Office, shedding light on diplomatic history throughout the twentieth century. It is based on three distinct print series which form a record of British peace-time diplomacy since the end of the nineteenth century: British Documents on the Origins of the War 1898-1914, Documents on British Foreign Policy 1918-1939 and Documents on British Policy Over-seas. Documents are selected and edited by the official historians of the FCO, with many resources pertinent to the outbreak of war specifically declassified for inclusion. Information relating to the period between the assassination of Archduke Franz Ferdinand and the declaration of war against Germany on 4 August 1914 is likely to be of particular interest. In addition to the official records of the Foreign Office, selected minutes and private letters are also included.

The House of Commons Parliamentary Papers (HCPP) contains bibliographic records and searchable full text for over 200,000 papers printed between 1688 and 2003/4, including many resouces of direct relevance to the outbreak of WWI. It also includes Hansard (parliamentary debates). Both Houses of Parliament, the Commons and the Lords, produce parliamentary papers. Although HCPP is a collection of Commons papers, some from the Lords are also included. This is because the Lords often presented papers to the Commons, such as reports prepared by Lords Select Committees. HCPP delivers page images and searchable full text for each paper, along with detailed indexing.

Those researching the origins of WWI may be interested to consult the Bodleian Law Library, which holds British and Foreign State Papers (1812-1934) including the text of treaties, diplomatic correspondence, foreign constitutions and laws pertaining to international relations and British internal affairs.

The Bodleian also holds a copy of The Truth About German Atrocities. Founded on the report of the Committee on alleged German outrages (1915),
a controversial document written at the outbreak of war in response to the invasion of Belgium. The report has long been a bête noire for those cultural historians examining contemporary popular attitudes, it having been concluded by earlier commentators that it was founded almost entirely on lies. Modern research, on the other hand, has suggested differently.