Changes in Work and Employment

The Economist Historical Archive (1843-2010), accessible via SOLO, provides a valuable resource for researchers examining changing WWI employment patterns, their impact on the British economy, and vice-versa. It delivers a complete searchable copy of every issue from 1843 to 2010, with images, multiple search indexes, and the facility to browse included.

The War Emergency Workers' National Committee was a joint Labour organisation established at the beginning of the First World War. Originally constituted as a peace committee, it soon evolved into something more like a representative of the working classes during wartime. It pressurised ministers on key issues including rent controls, food prices and benefits for servicemen and their families, also contesting matters such as employment, wages and conditions of service. The Bodleian holds a range of literature produced by the Committee (searchable via SOLO), including the pamphlet The workers and the war: a programme for labour (1914), which outlines key objectives and a determination to 'formulate a connected Labour programme and policy of such a character as will more completely arrest existing distress, and prevent as far as possible further distress and unemployment in the future.' Also available is The War Emergency: suggestions for Labour members on local committees (1914), which encourages local authorities to do all they can to prevent wartime unemployment.

Of additional interest are the diaries, correspondence and official papers of Christopher Addison, held within Special Collections. When Lloyd George set up the Ministry of Munitions in 1915, Addison was appointed Parliamentary Secretary, chiefly in charge of supply. He made use of new methods of organisation known as ’War Socialism’ to carry out increased production. Private enterprise was brought under control of the Government, which erected its own factories, and great care was taken to improve the welfare of the munition workers. In July 1917 Addison left the Ministry of Munitions to become Minister of Reconstruction, where he set about drawing up a new plan for post-war Britain, including many social reforms. Evidence can be found that much of his work touched on improving the lives of men and women who worked in wartime industries, including their employment prospects following the conflict.

As highlighted earlier in the guide, the war initiated huge changes in work and employment. These changes impacted on everyone, both in the short and long term, and were essential to keeping both the military and the Home Front moving during the conflict. As Britain's men headed abroad to fight, women took their place en masse in factories, shops and offices, and on the land. Munitions factories became a mainstay, and more than a million women took the chance to serve across the economy - from tram drivers and train cleaners, to postal workers and police patrols.

This excerpt, drawn from digitised material on the IWM Collections and Research website, is called 'Women winning the War', and depicts work in a busy munitions factory. Women (and often boys) were integral to the success of these factories. They worked on capstan lathes and large vertical drilling machines, performing demanding tasks in conditions that were often poor and arduous. Producitivity was at a premium during the war; in order to keep pace with demand from the front line, 12 hour shifts were common – and some women worked 13 days without a break.

The Women’s Library is a key resource for historians examining changes in female employment during WWI. It contains multiple scrapbooks documenting women's efforts to fill the gap left by a generation of fighting men, including a selection of  albums focused on specific employment sectors; for example, medical (ambulance service, nurses, hospitals), Women’s Army Auxiliary Corps (WAAC), Women’s Royal Air Force, munitions industry, Land Girls and Public Services. The albums consist of a range of press cuttings, from both national and regional newspapers.

In addition, the library contains the papers of Dorothea Barton, a prominent feminist campaigner concerned with ensuring that women in the workforce were treated fairly. Her papers consist of historical and contemporary notes, statistics, press cuttings and articles and reviews on women and their welfare, as well as papers, reports and typescripts of articles on their wages and working conditions.

As noted elsewhere, the British Library of Political and Economic Science (LSE) contains the personal and business papers of William Beveridge. This includes material relating to his work with the Ministry of Munitions (1915-1916), such as correspondence and reports on manpower problems, and memoranda concerning the history and activities of the Ministry. There are also papers from the Manpower Distribution Board (1916), providing further insight to official approaches to wartime employment.

In addition, researchers can access minutes and papers of the Ministry of Reconstruction. The Ministry was set up in July 1917, and covered a wide range of economic, social and political issues, from administrative reform and improvement of industrial relations, to the position of women in society and the prevention of post-war unemployment. It was split into several sub-committees, including the Reconstruction Committee and the Civil War Workers Committee, material from which is available to consult. Beveridge acquired documents collated by the Women's Employment Sub-Committee and its Industry Group concerning the types and conditions of employment of women, and details of schemes to substitute them with men; along with correspondence, memoranda, minutes and the final report of the Civil War Workers Committee concerning the demobilisation of females employed during WWI.

During WWI a great many refugees fled to Britain. The German invasion and occupation of Belgium in 1914, for example, caused Belgian civilians to migrate to neighbouring countries on a massive scale. At its peak, some 250,000 took refuge in Britain. In turn, sections of the German media used the case of Belgian refugee workers for propagandist purposes, suggesting that they were exploited by the war economy.  A booklet held at the British Library (selections of which have been digitised) seeks to refute the assertions of the newspaper Kölnische Zeitung that the ‘condition of the Belgian workmen who have taken refuge in England is not far removed from slavery’. Instead, it argues that Belgian workmen in British factories were employed under the same terms and conditions as British workers, and were paid the same wages. The booklet seeks to dispel anxieties around migrant refugee workers being exploited or used to drive down wages. In fact, the Belgian migrants in Britain who worked in munitions contributed significantly to the war effort.

With a large part of the male working population either volunteering or being conscripted to go off to war, many families found themselves in a position where they lost a proportion or in some cases all of their household income. The British Library provides access to documentation concerning the Separation Allowance, introduced in order to alleviate some of these problems. The Allowance consisted of a portion of a soldier’s pay, which was generally matched by the government, to ensure that the soldier’s dependents were not left destitute. 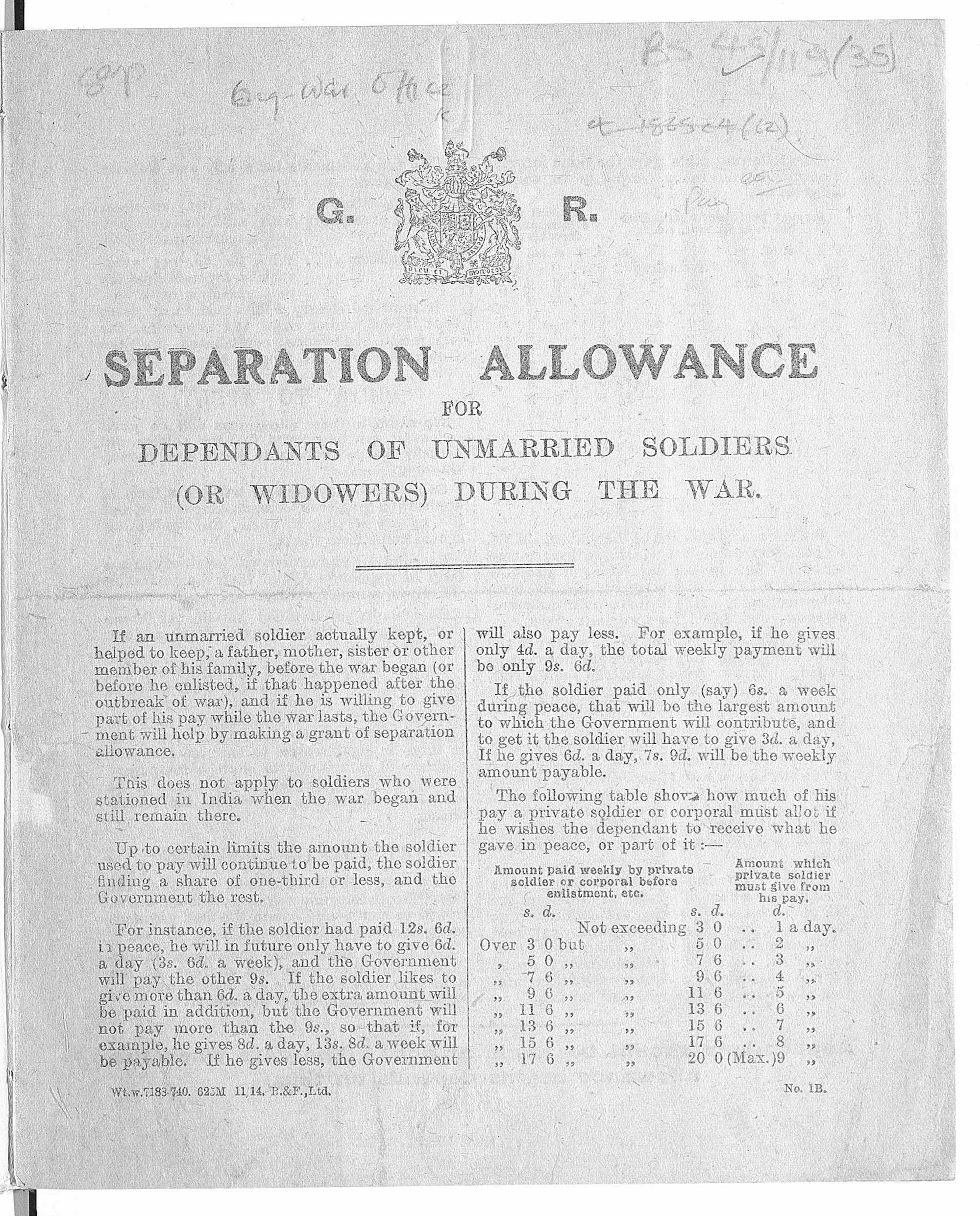