League of Nations: Guide to documents and publications

The collection is housed in the Official Papers section, which is situated in the basement of the Bodleian Law Library. All material is open shelf. Periodicals and some of the documents are catalogued so a good place to start is SOLO. Oxford Libraries' catalogue,

Not all League of Nations documents are catalogued, so may not appear on SOLO. If you cannot find what you are looking for please contact official.papers@bodleian.ox.ac.uk and the official papers staff will be happy to assist.

There are two types of documents, the fundamental difference between the two was to whom the documents were distributed:

'Official numbers', were the working papers of an Assembly or Council and produced by committees and conferences. They were distrubuted to League members and depository libraries. So 'A.8.1833.V', refers to the 8th document distrbuted to the Assembly in 1933 on the subject of legal questions.

'Sales numbers' were publications which were on sale to the general public and date from 1926. These provided information about the League and provided the results of research that would be of interest to the public. Sales numbers were divided into broad subject categories as you can see in the left hand column. So '1928.IX.12' , refers to the 12th publication published in 1928 on the subject of disarmament.

Some documents have both official and sales numbers.

For a more indepth guide to document numbers, see the Northwestern University's Research guide to League of Nations Documents and Publications 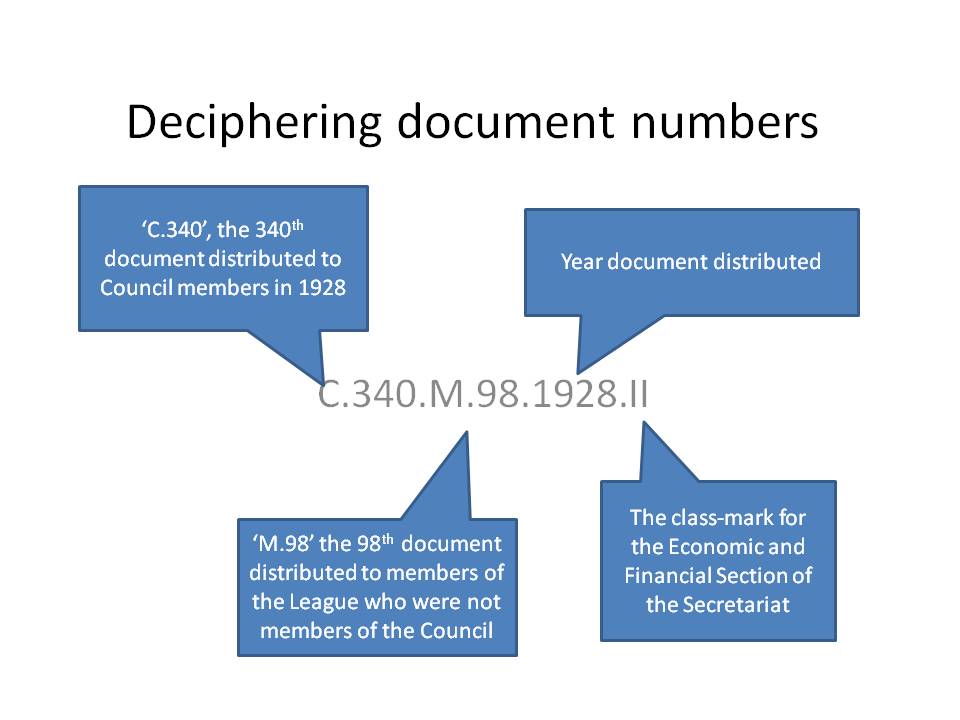 A. Documents addressed to the Assembly's delegations and the Member States

C.L. Circular Letters addressed to certain member states or groups of member states (such as parties to an international convention supervised by the League

C.M. Documents addressed to the Council and at the same time to all other members of the League.

Used for Official documents and sales publications: Subject based categories

The Répertoire Général is the principal finding aid for the League of Nations Secretariat archives, as well as for the Refugee Mixed Archival Group (Nansen Fonds) and the External Fonds. The Répertoire was completed in 1969 after a three year project conducted to render the League Archives more accessible to researchers.

The Répertoire is generally organized according to the sections of the League and contains an index of series or subjects for both Registry Files (the archives "proper", containing correspondence, draft documents, and similar materials) and the Section Files (the working papers or office files of the sections, which were kept in a variety of ways and whose contents can vary greatly according to section; typically they may contain press cuttings and/or copies of documents and publications, but may also contain substantive materials as well).