Our changing exhibitions showcase some of the most interesting collections from LMH Library and Archives. You can view current exhibitions in the display cases on the entrance floor - just lift the protective covers - and you can explore highlights on this page. Have a look at our previous exhibitions at to see more of the collection: ox.libguides.com/lmh/previous_exhibitions

At the moment we don't have step-free access to the exhibition space, but if you contact the library (email librarian@lmh.ox.ac.uk) items can be brought to the downstairs floor. External visitors can view exhibitions by appointment. 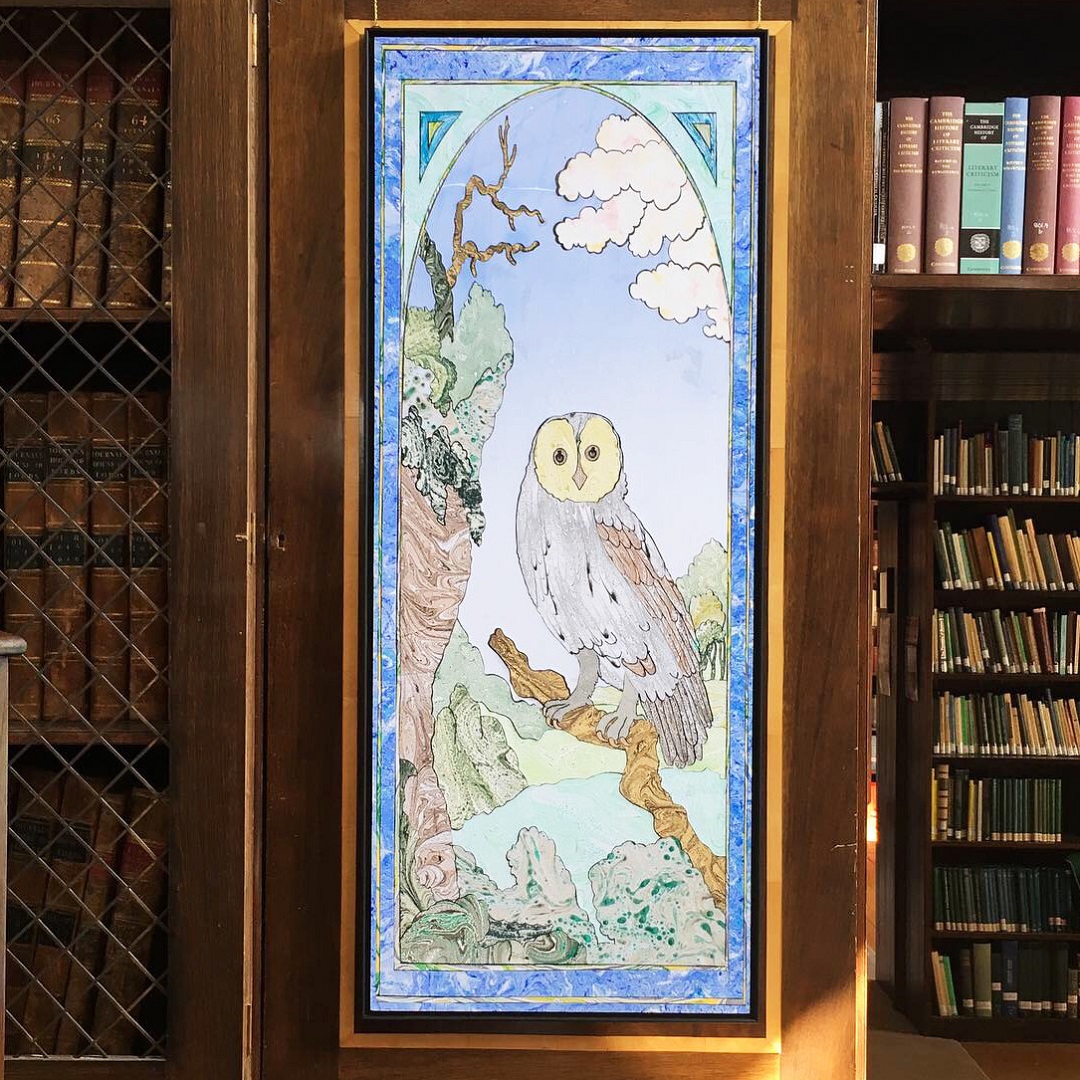 She was inspired to contact Allan Doig with an update of her work after she had read, in the 2019 Brown Book, an article on our book binding exhibition, and particularly admired the pictures of marbled papers from that display. He immediately saw the exciting potential for an art installation in LMH Library, to tie in with our book displays, and put us in touch. 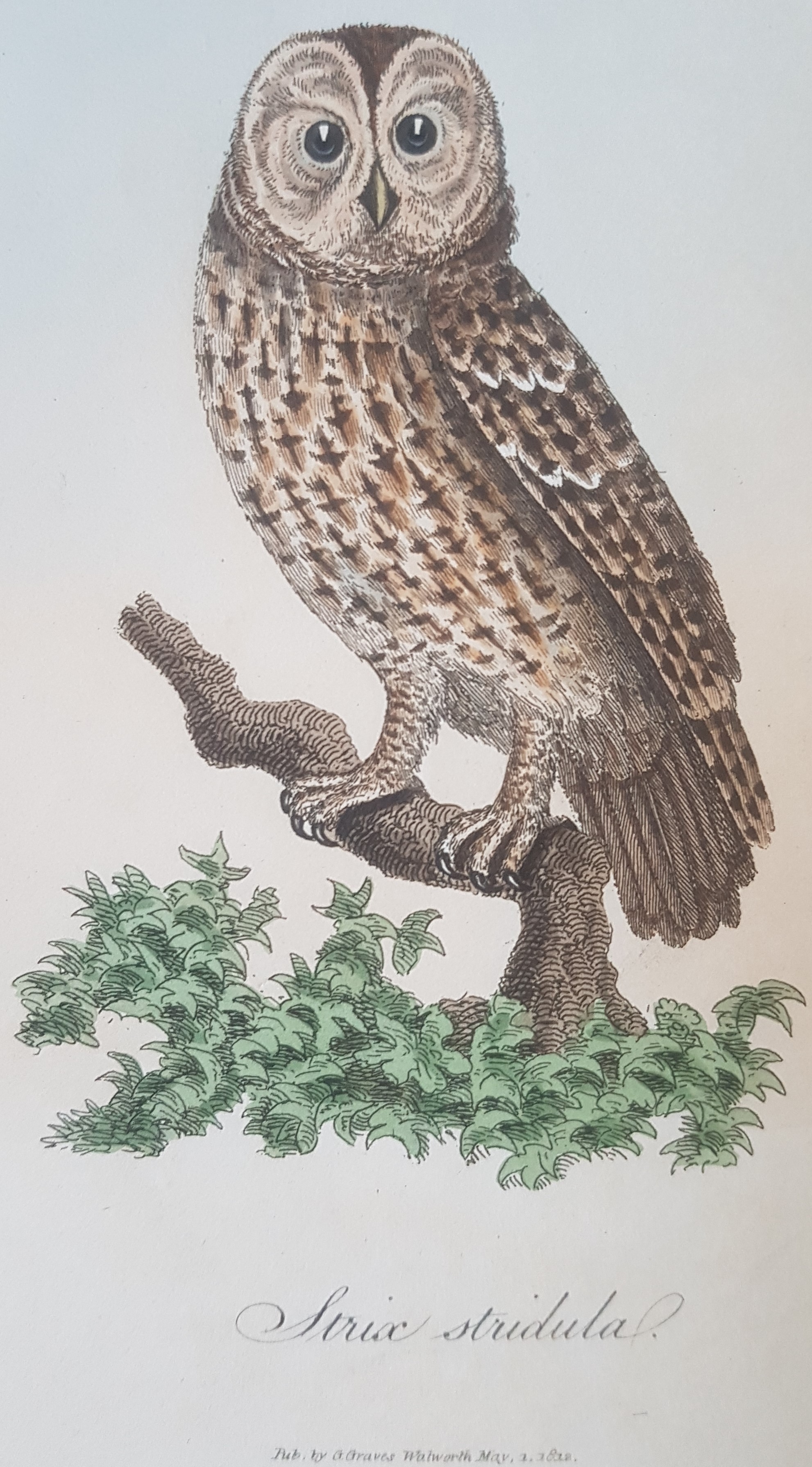 2 of 7 | Tawny owl from 'British Ornithology'

Visiting LMH and looking at some books from the Briggs Room, she was drawn to our second edition of British Ornithology (London: Graves, 1821), written and illustrated by George Graves. She was fascinated by the plates depicting owls, wanting to explore how caricatured and deadpan the drawing style is, particularly for the depiction of such symbolically intelligent and ethereal creatures. 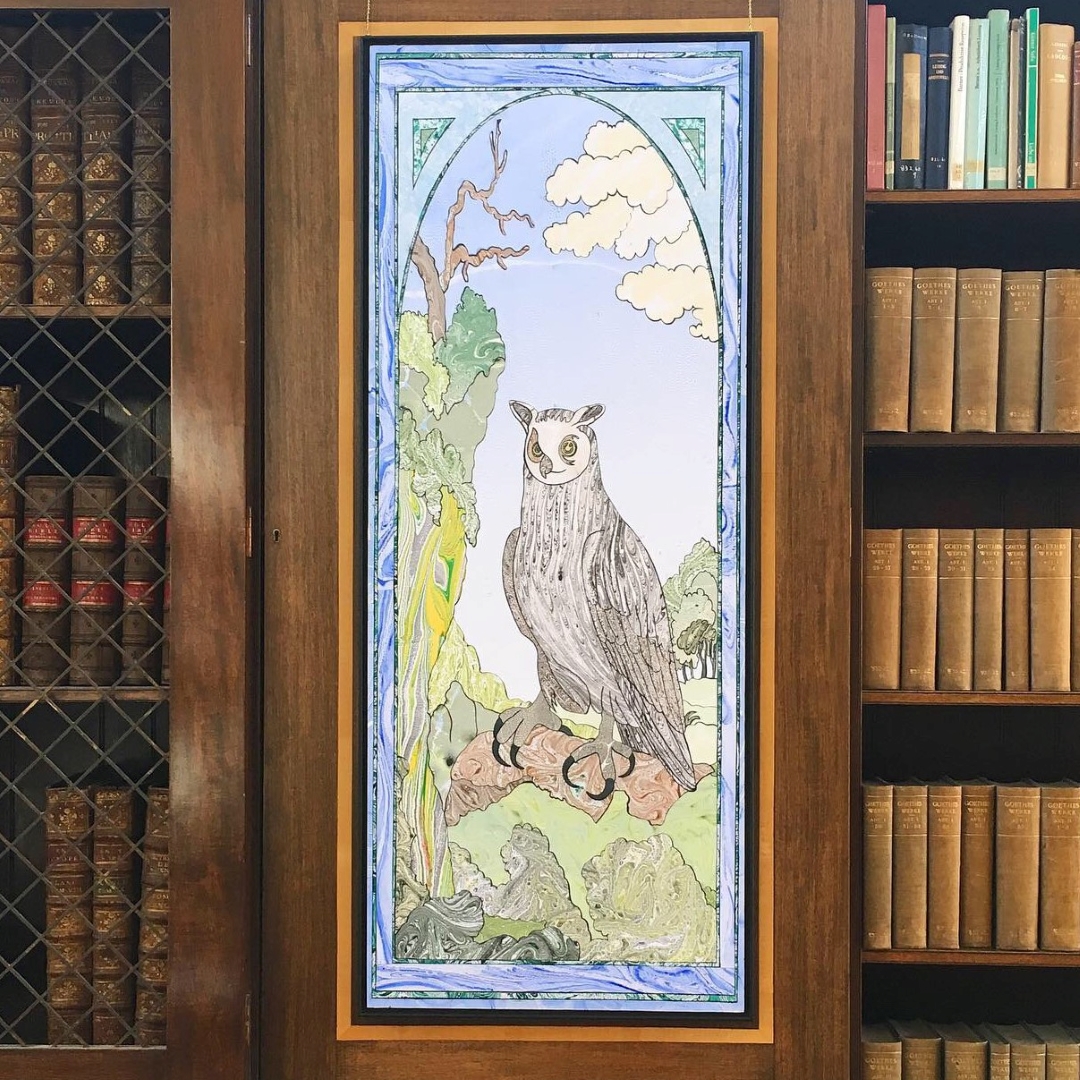 Their expressions are comparable to the contemporary comedy trope of looking directly at the camera, breaking the fourth wall. They are deeply serious, but also quite preposterous due to their facial discs making them look almost cartoon-like, and their stereoscopic forward-facing eyes humanising them compared to many birds. 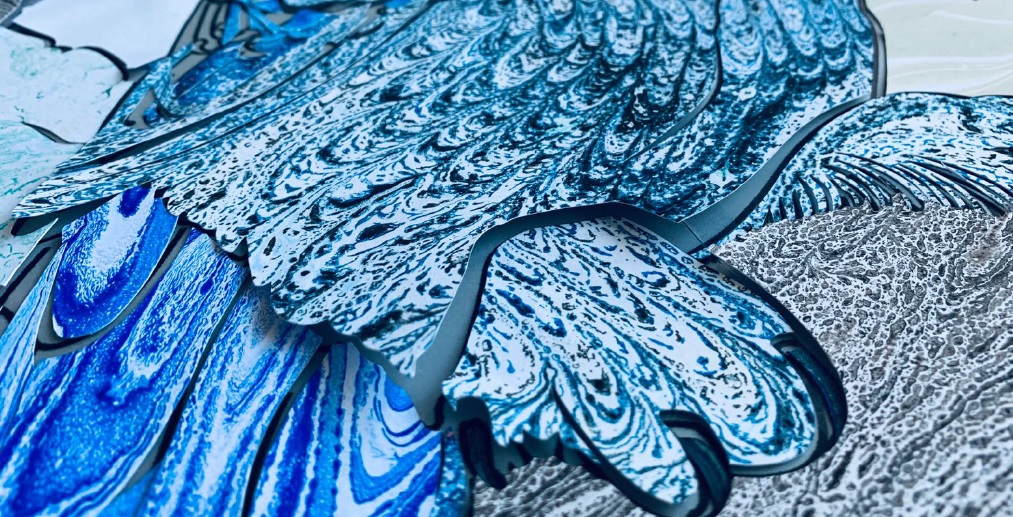 Erin decided to set each of Graves’ owls against a repeating backdrop of a simple landscape drawn from a Pietre Dure image, emphasizing their staged compositions. She hand-marbled all the paper, using a variety of styles – as well as natural marbles, she also used a loose nonpareil marble pattern to recreate the effect of the owl feathers. This technique is traditionally used on end papers and book bindings, further locating the work within the library context. 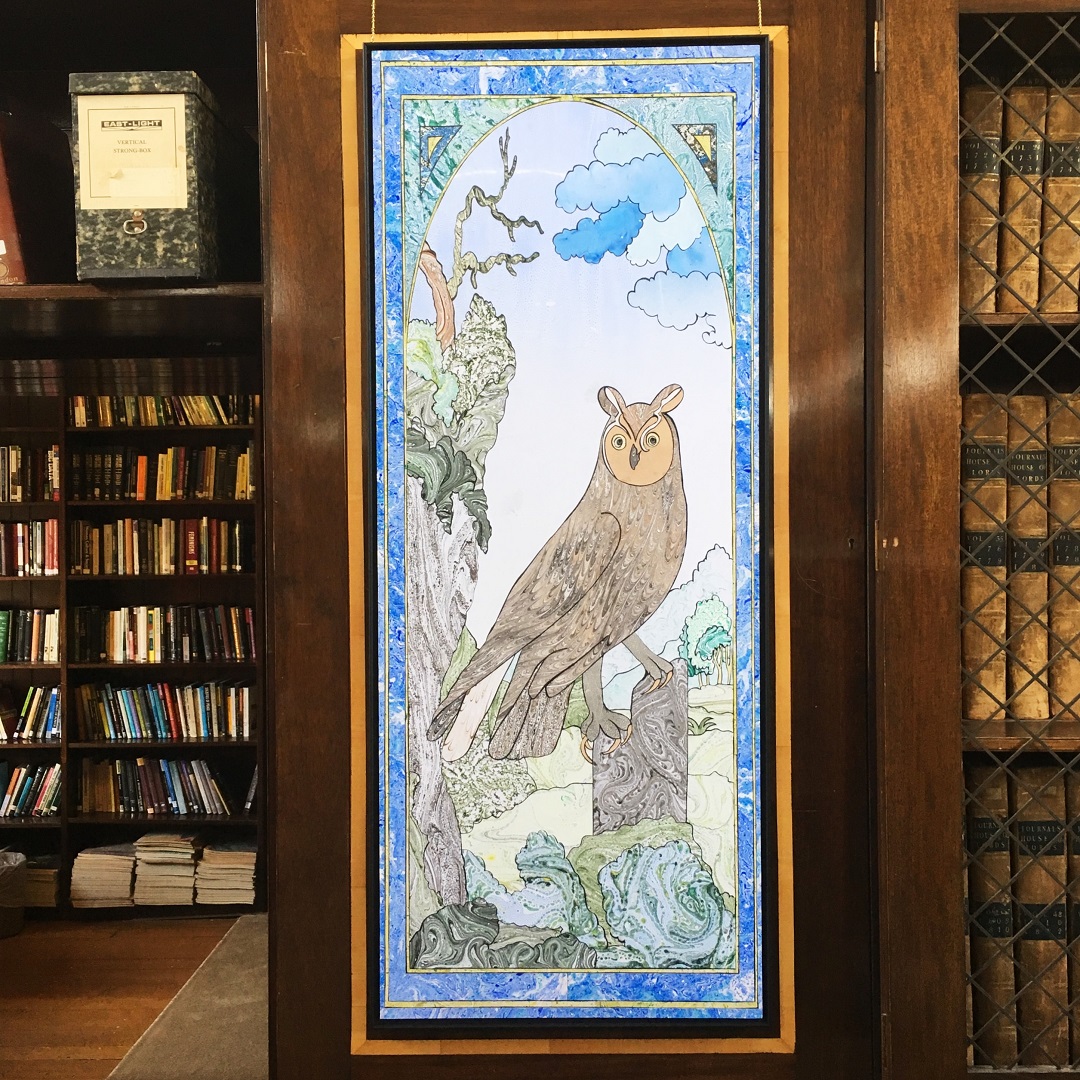 The finished installation spans four corners of the library, holding the space with their curious expressions. They have been placed on cupboard doors, again tying it into the Pietre Dure tradition, which was often used for cabinet door inlays. When you first enter the library they grab your attention, brightening the whole space (several visitors have remarked that they thought they were images on back-lit flatscreens). However, it is only when you study them up close you begin to see all the details, and the different textures of marble, getting the full experience. The labour intensive, hand-made collage process creates an image that deeply rewards an active and close look. 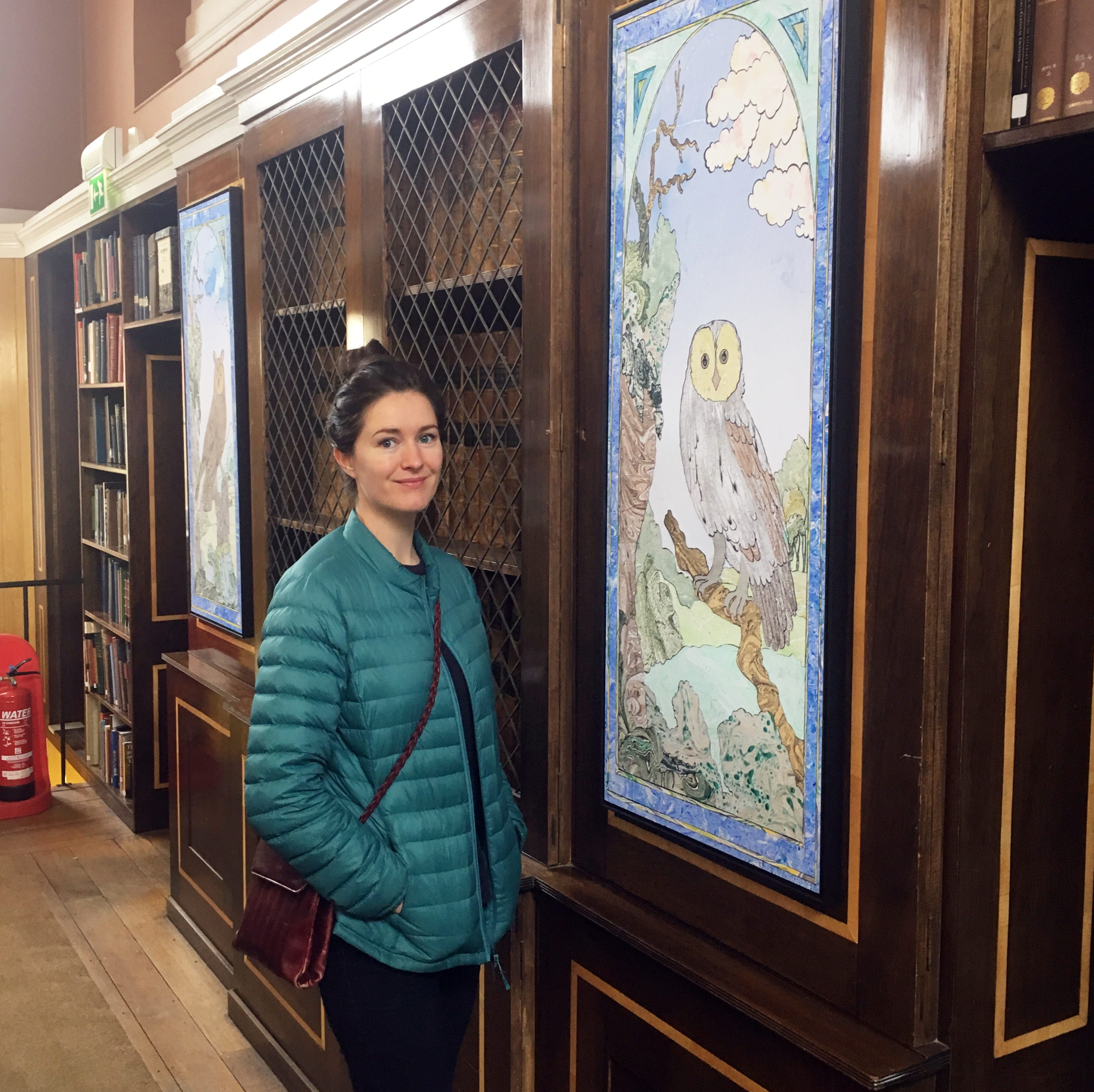 The exhibition opened in September 2019, for the annual Oxford Open Doors (oxfordpreservation.org.uk/content/oxford-open-doors) day (when many colleges and spaces in Oxford put on free exhibitions or displays, and encourage visitors). Erin also returned to the college in Michaelmas 2019 to talk to our Fine Arts students about her life as an artist and the creation of the works. We are hoping that the installation will remain up for this year’s Gaudy Garden Party and Open Doors (coronavirus permitting!) 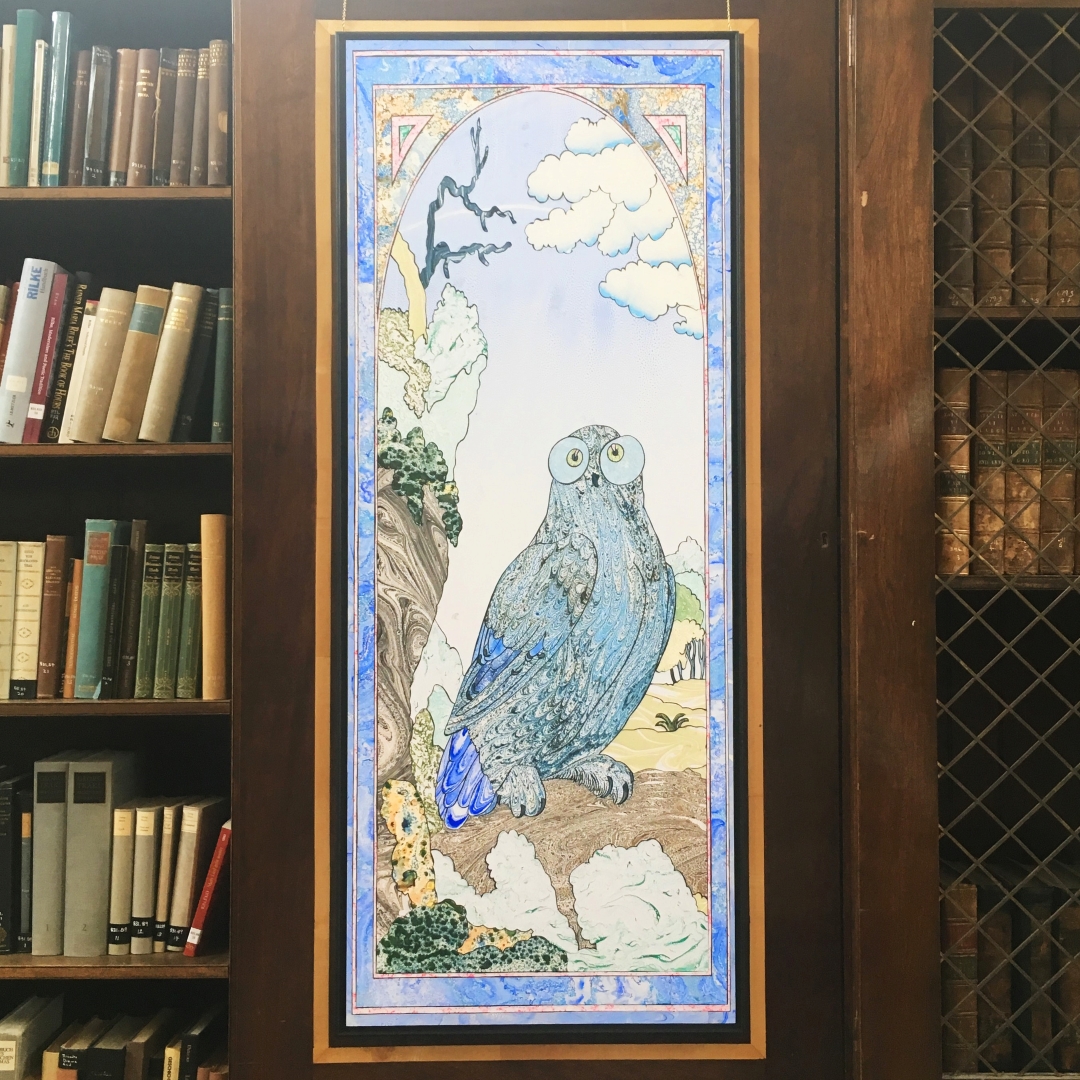 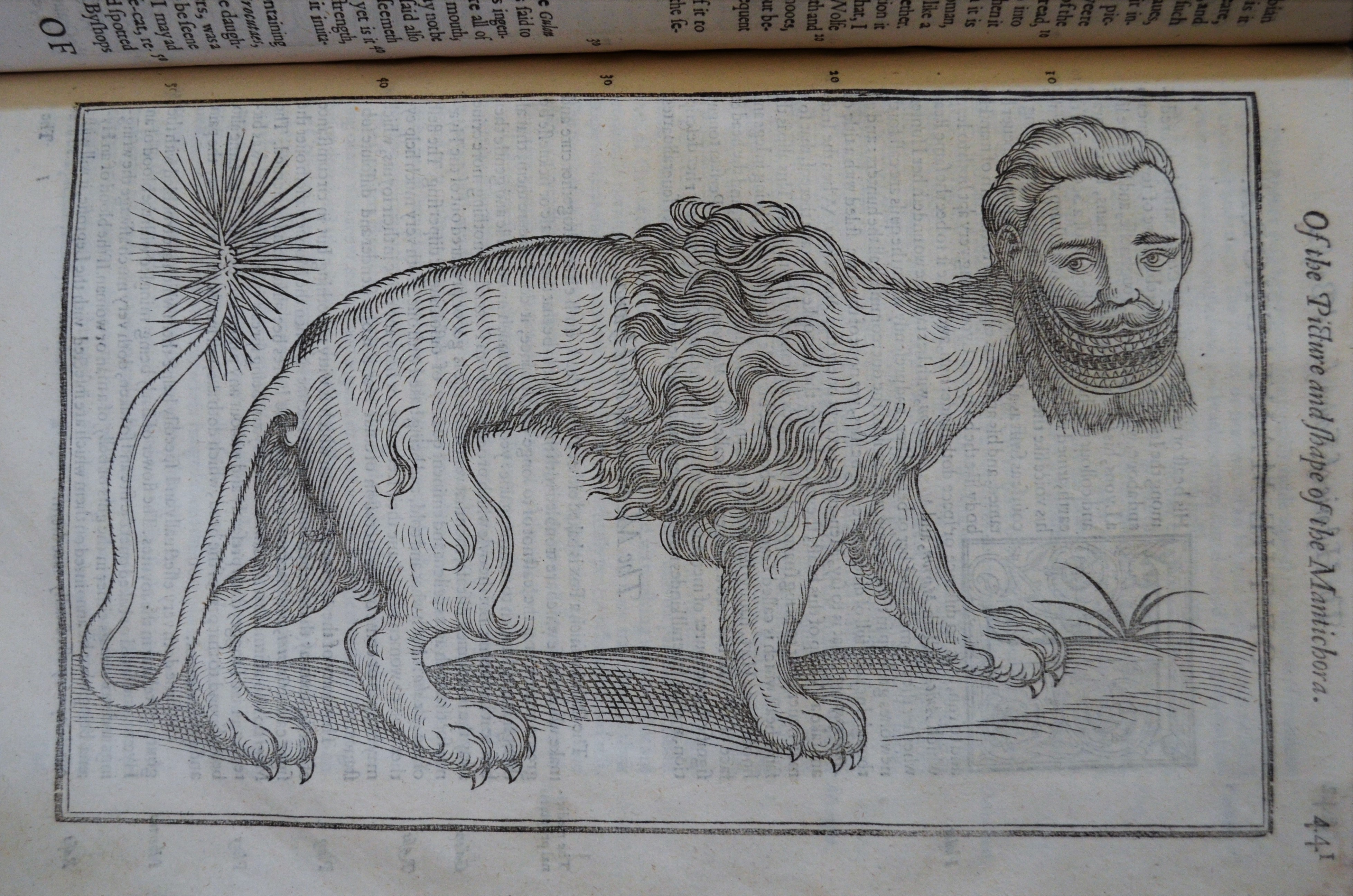 17th-century bestiary The Historie of Foure-Footed Beastes is a collection of creatures, some more real than others. Among the more recognisable descriptions are the ‘Cat’ and ‘Wilde cat’, as well as larger species like the ‘Lyon’ and ‘Linx’. But these are joined by a more fantastical cat-like creature, the manticore or ‘Mantichora’.

The legend of the manticore was first told in Persia. This version of it is described by Edward Topsell (c. 1572–1625) as having a body and feet ‘like a Lyons’ but a face ‘like vnto a mans’, with ‘the taile of a Scorpion’ and ‘the voice of a small trumpet’. You can also see its ‘treble rowe of teeth’, which it uses to eat people.

There is debate around to what extent people at the time believed in the reality of creatures like the manticore, or whether they had a more symbolic significance. 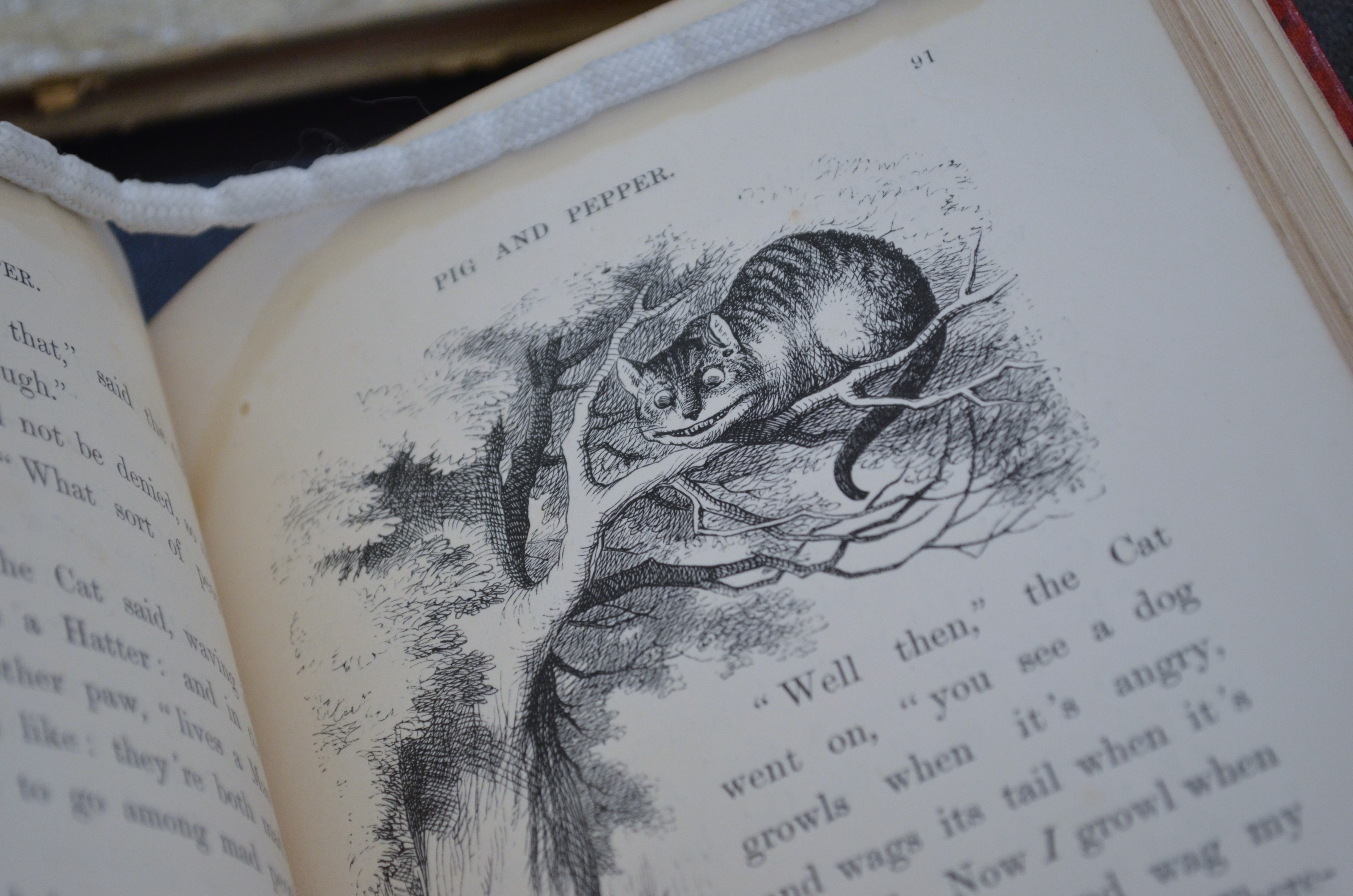 The Cheshire Cat’s grin is less threatening than the manticore’s, but still a bit uncanny. ‘To grin like a Cheshire cat’ was a 19th-century idiom before Lewis Carroll (1832–1898) borrowed it for a character name, but there are many theories about where the phrase originated.

John Tenniel (1820–1914) created the illustrations for early editions of Alice’s Adventures in Wonderland, including this one. Cats sometimes appeared in his more satirical work too, with the faces of political figures like William Gladstone; anthropomorphised animals were popular in the Victorian era.

Our copy of Alice’s Adventures was given to Edith Jebb by the author. It was donated to LMH by Jebb’s niece, Cynthia Borough, who studied at LMH between 1919 and 1922. 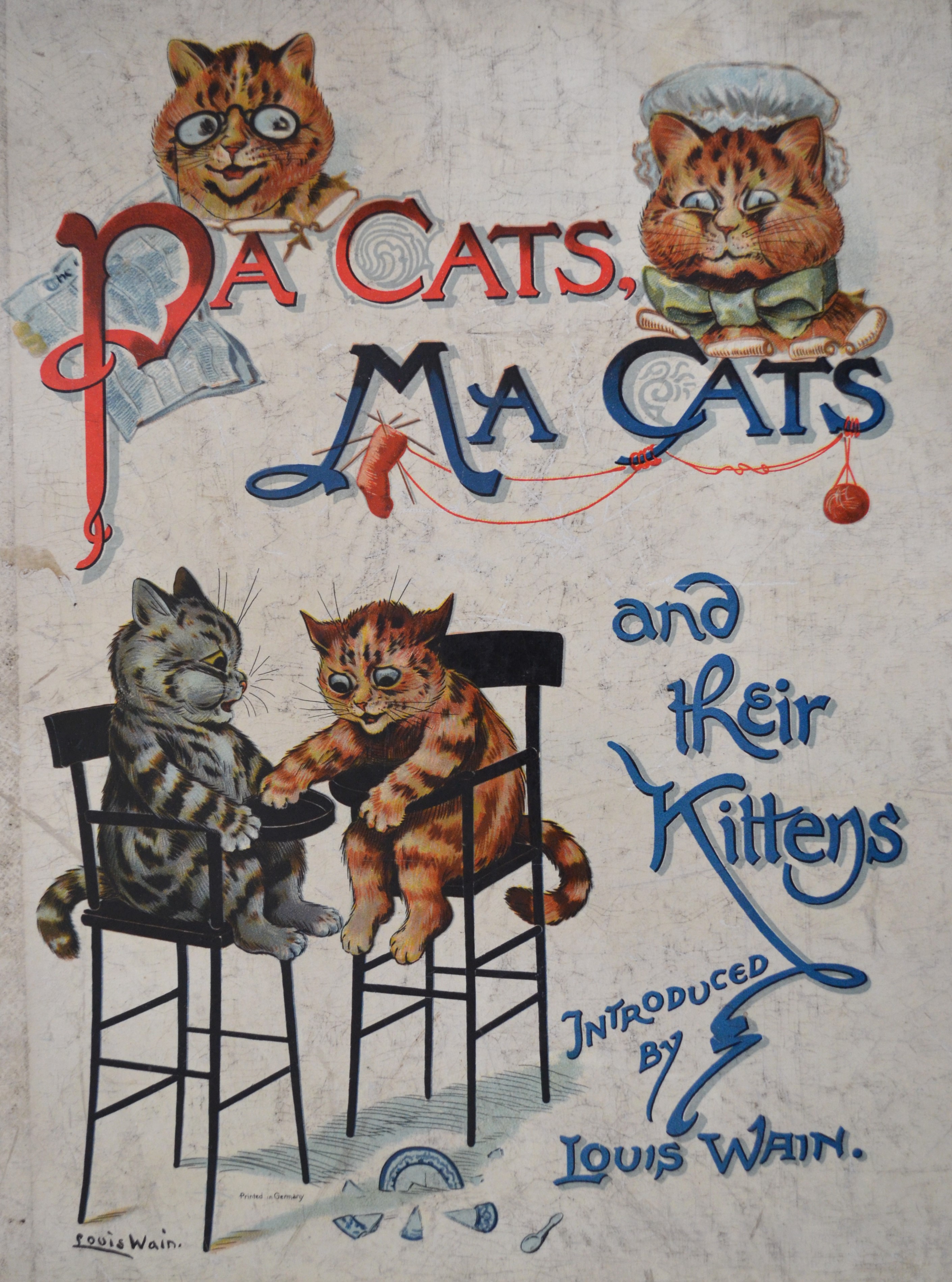 ‘He invented a cat style, a cat society, a whole cat world.’ 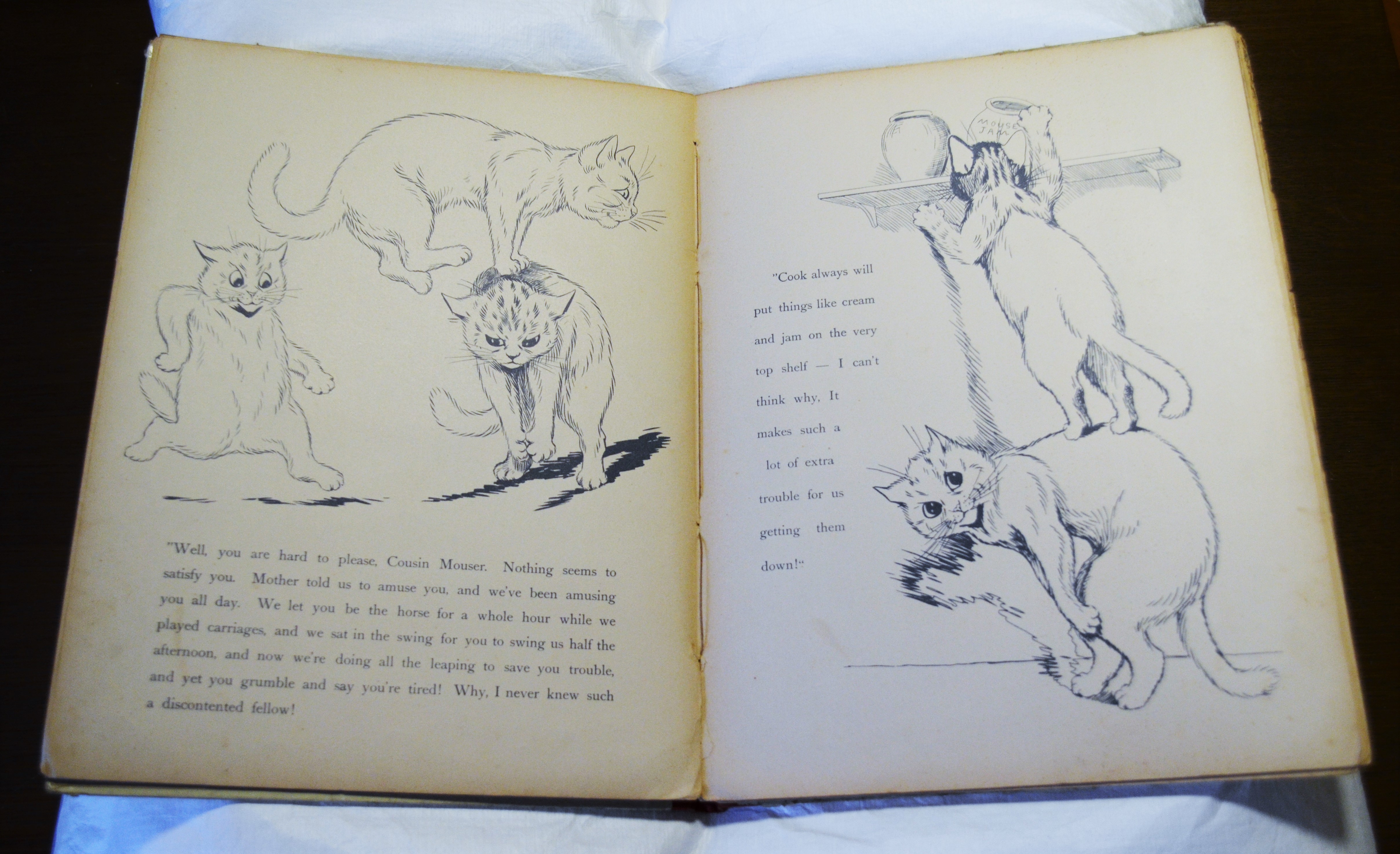 Richardson developed breast cancer soon after they married, and Wain began to draw Peter while the two of them kept her company during her illness. Soon Wain was drawing enough cats to produce more than two hundred illustrated books over his lifetime. Much of his later life was spent in hospital receiving care for mental illness, where he continued to produce illustrations. Work has recently begun on a film of Wain’s life.

The early 20th century saw the transformation of cats from mistrusted animals into treasured companions. Work by artists and writers portraying cats in a positive light may have both contributed to and reflected this, including Pa Cats, Ma Cats and their Kittens and Wain’s many other publications. 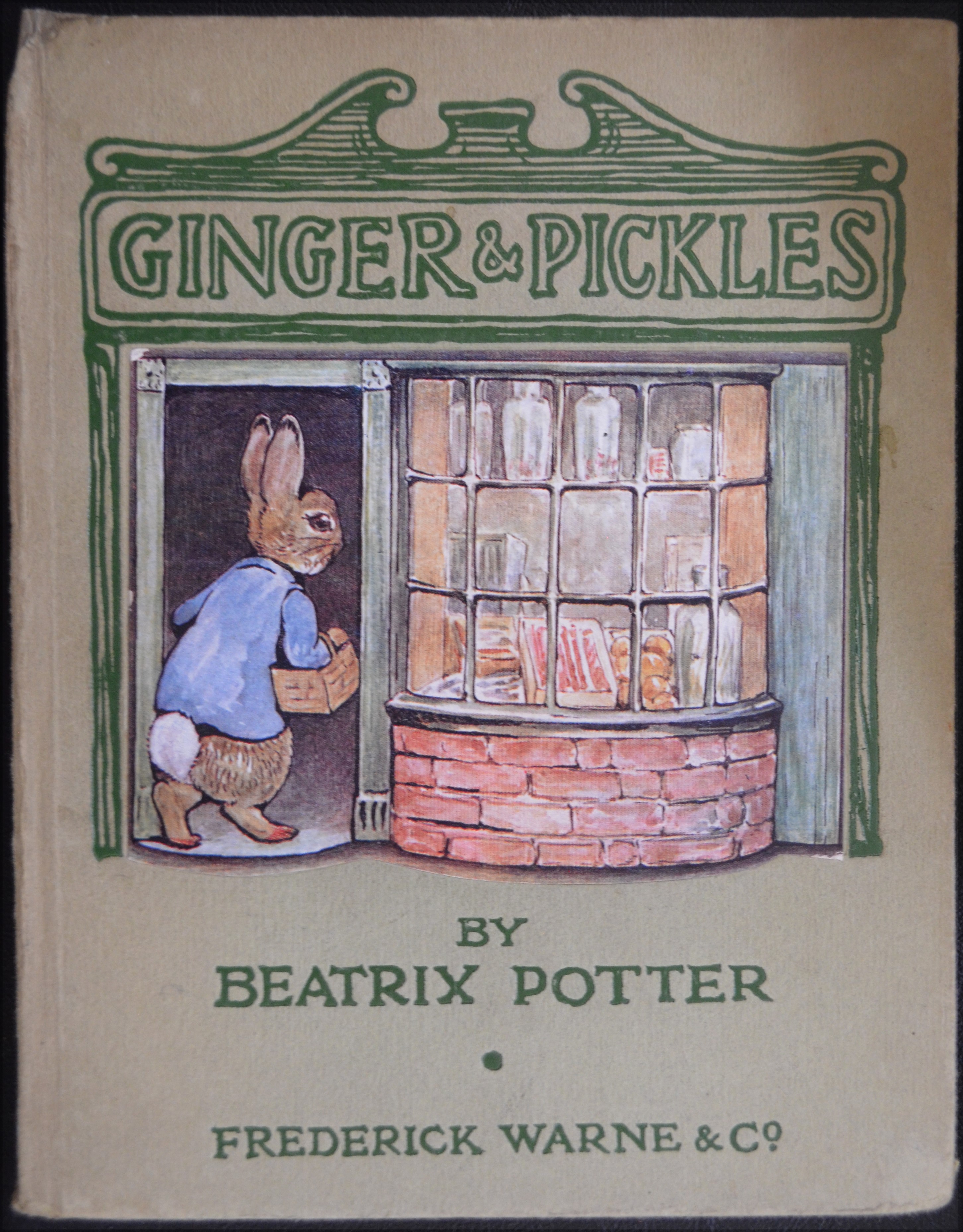 Like Louis Wain, Beatrix Potter (1866–1943) was inspired by her pets, most famously by her rabbit Peter. Ginger & Pickles is part of the Peter Rabbit series, and Peter and other characters from the series pop up in the book, visiting the shop run by the title characters. 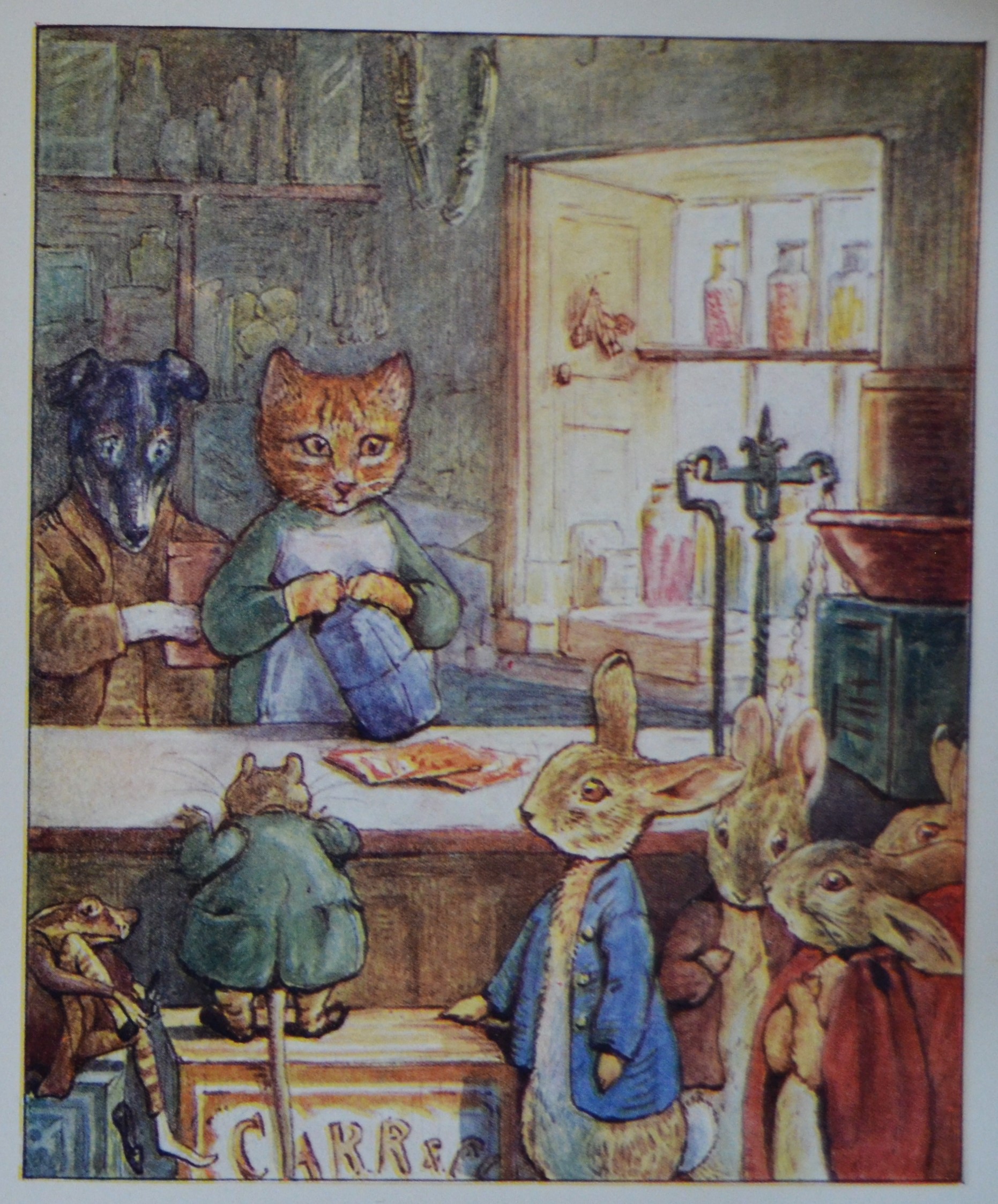 Ginger, the cat in Ginger & Pickles, was also inspired by a real animal: Potter based him on a cat called Tommy Bunkle, who lived with a school teacher near Potter’s house in the Lake District. The book is dedicated to a local shopkeeper, ‘old Mr. John Taylor, who “thinks he might pass as a dormouse”’; Potter based the character of John Dormouse on him.

As well as writing and illustrating her tales of fictional animals, Potter was involved in a more scientific approach to nature. Her interest in fungi lead her to study at Kew Gardens where she produced hundreds of scientific illustrations. 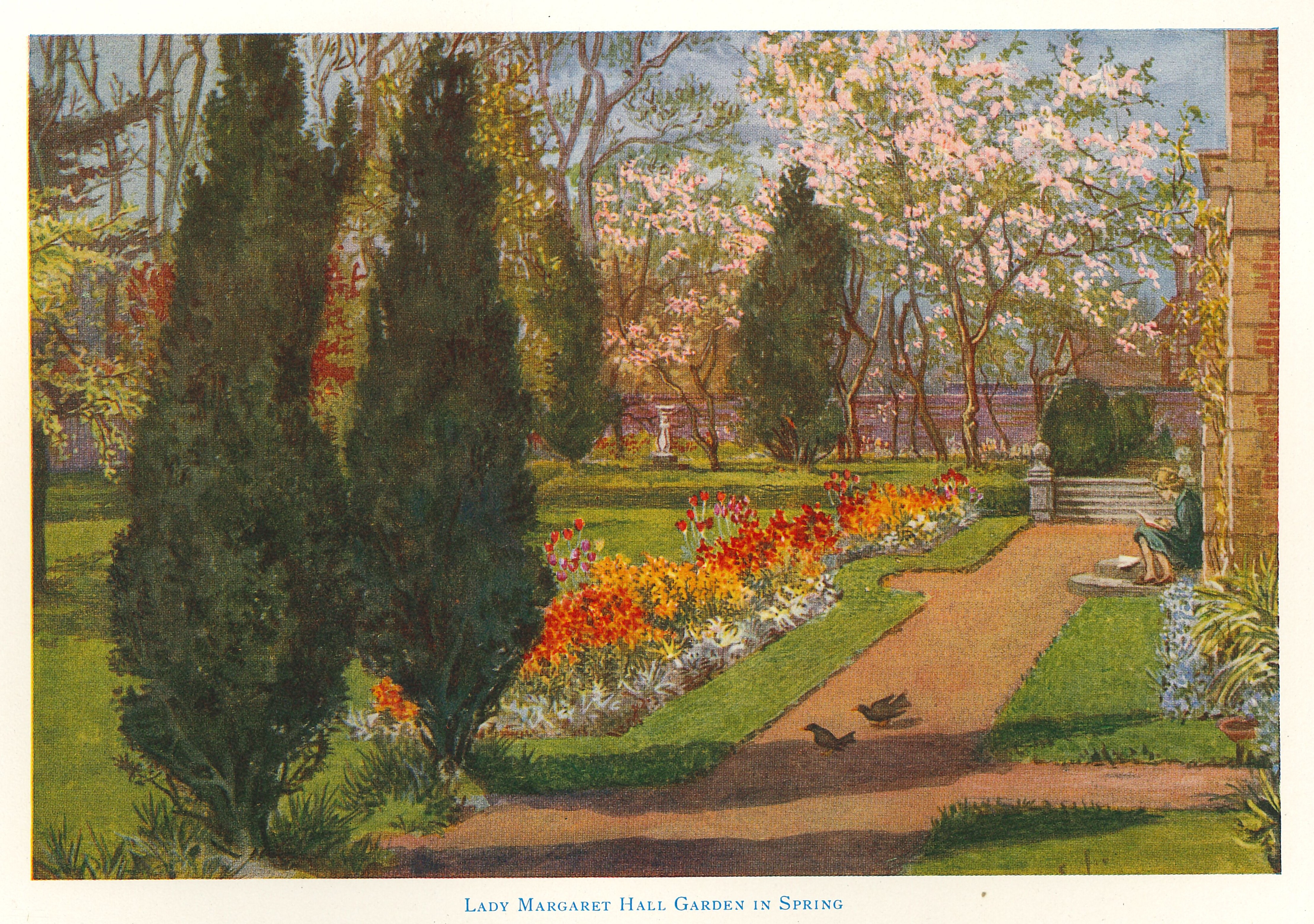 These images show some of the dramatic changes that occurred in the LMH grounds over a single decade, from the beautiful flowers and lawns of the early 1930s to the vegetable patches erected to help ‘Dig For Victory’ and the ducks producing eggs for hall during World War II. 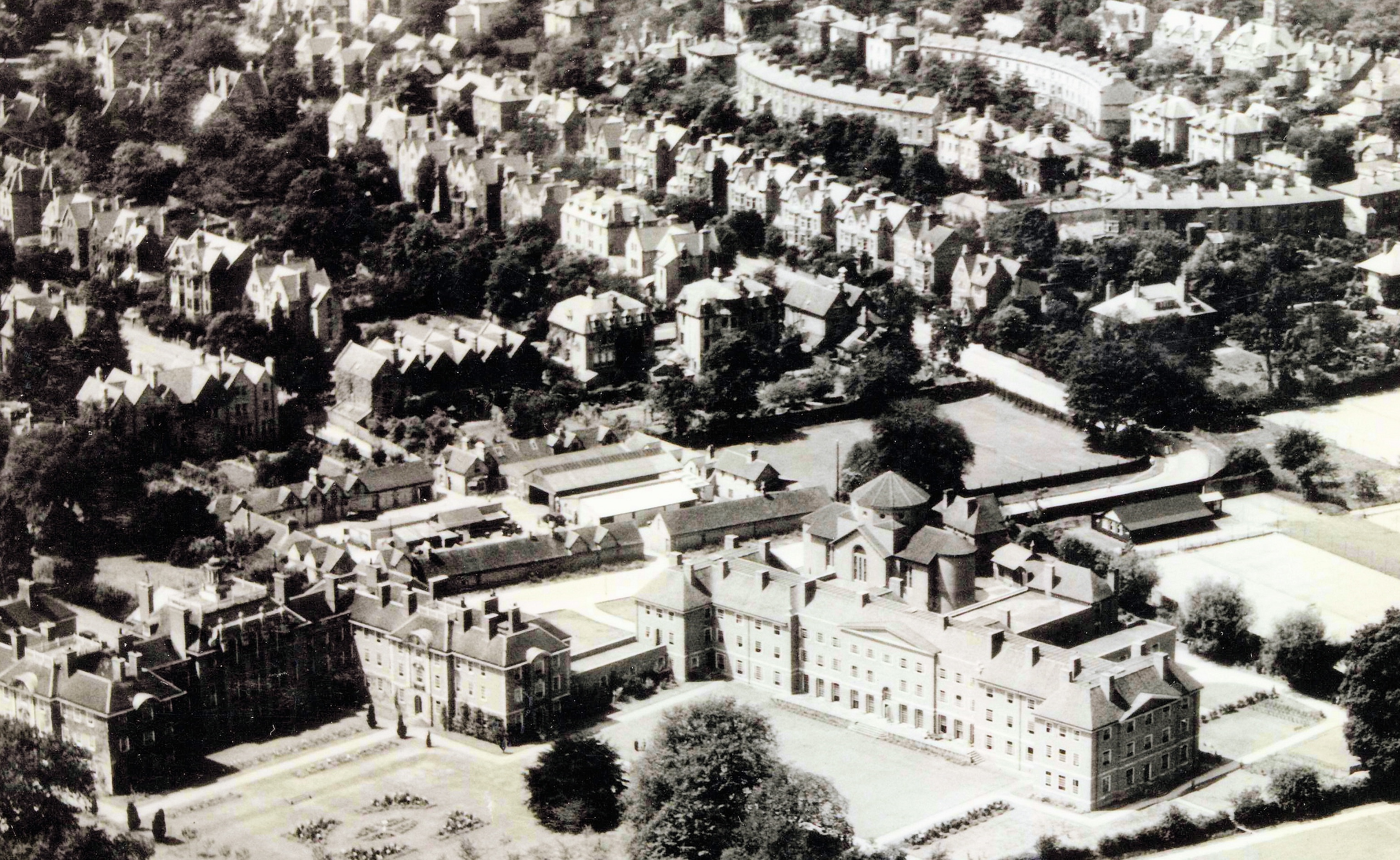 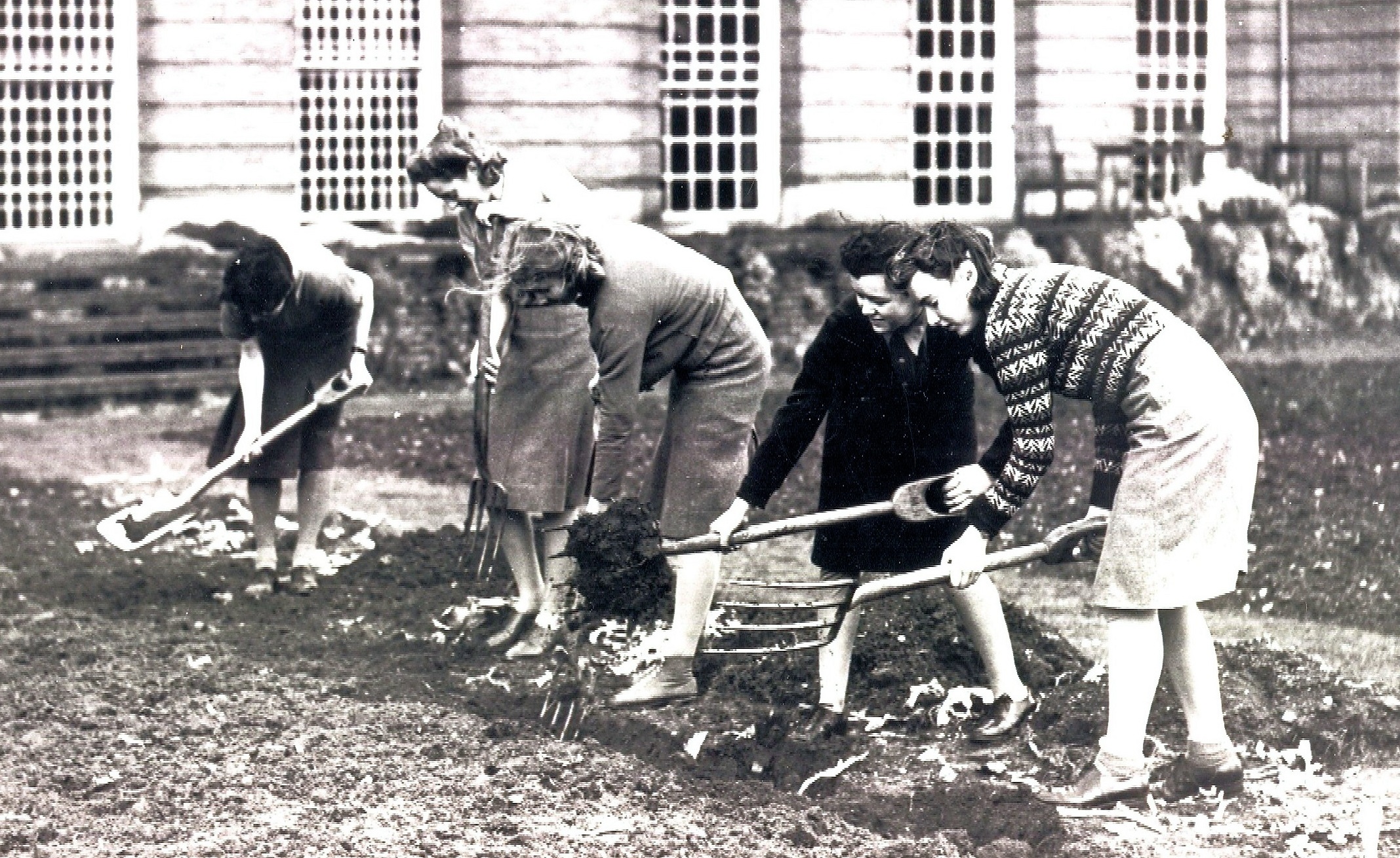 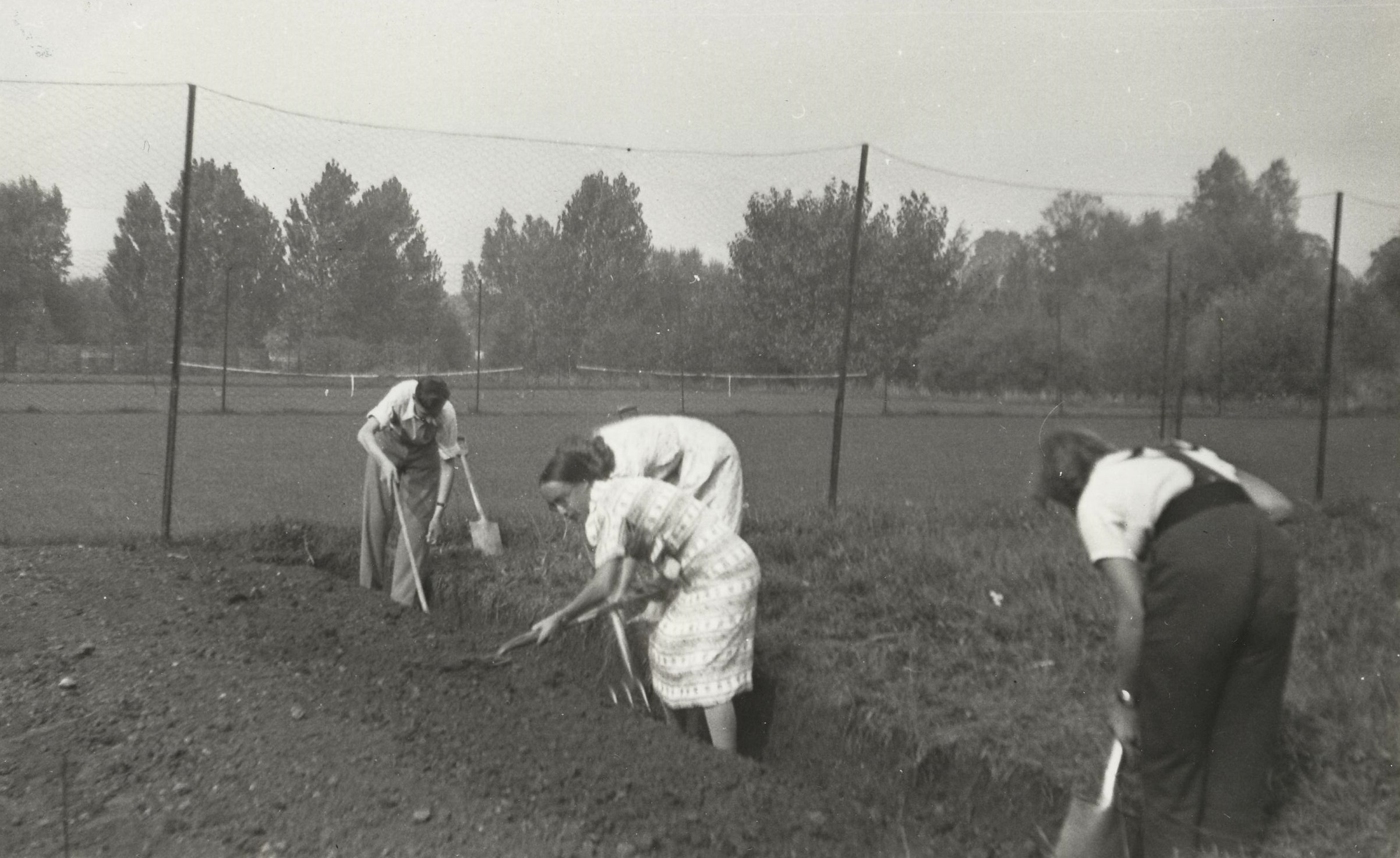 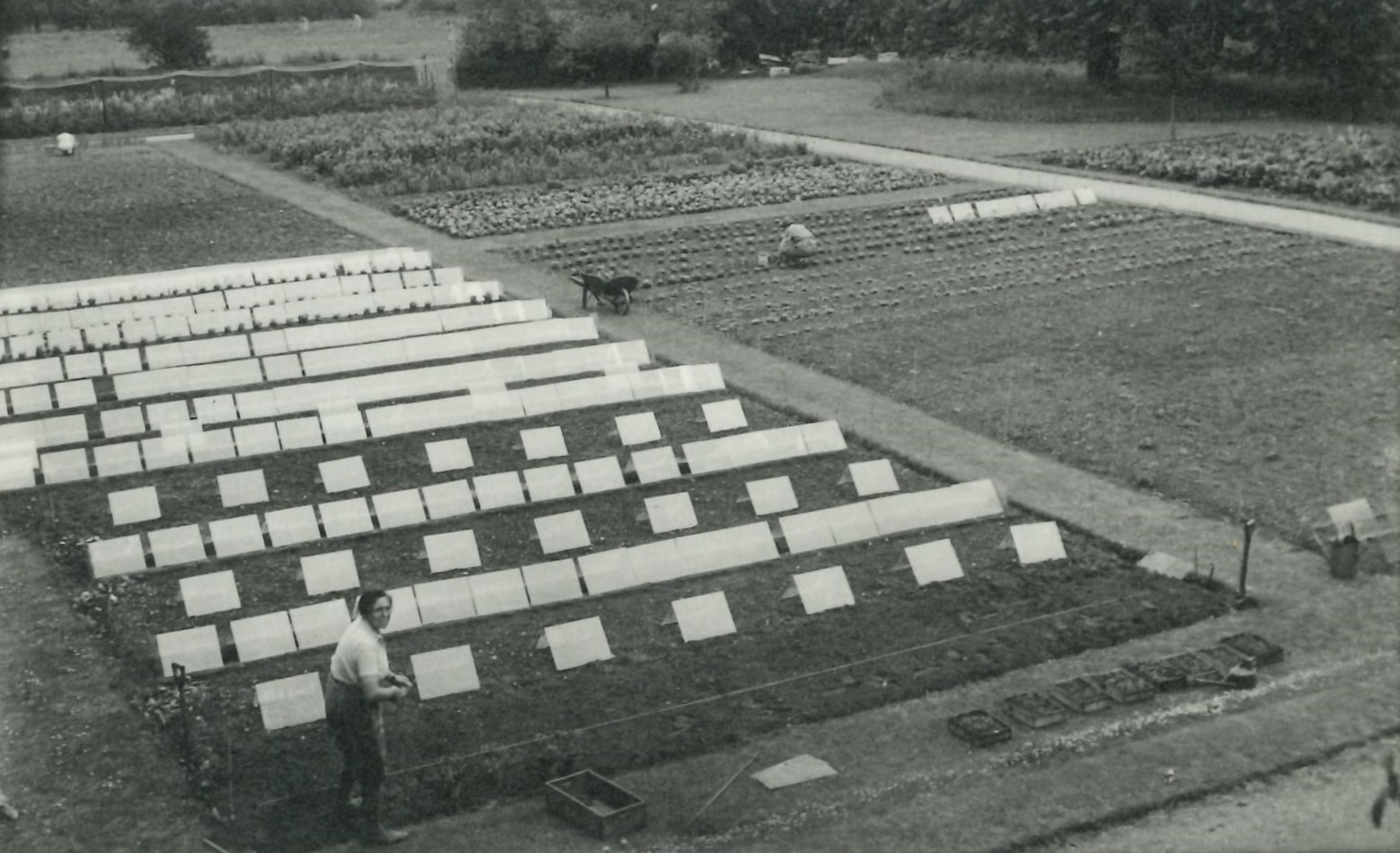 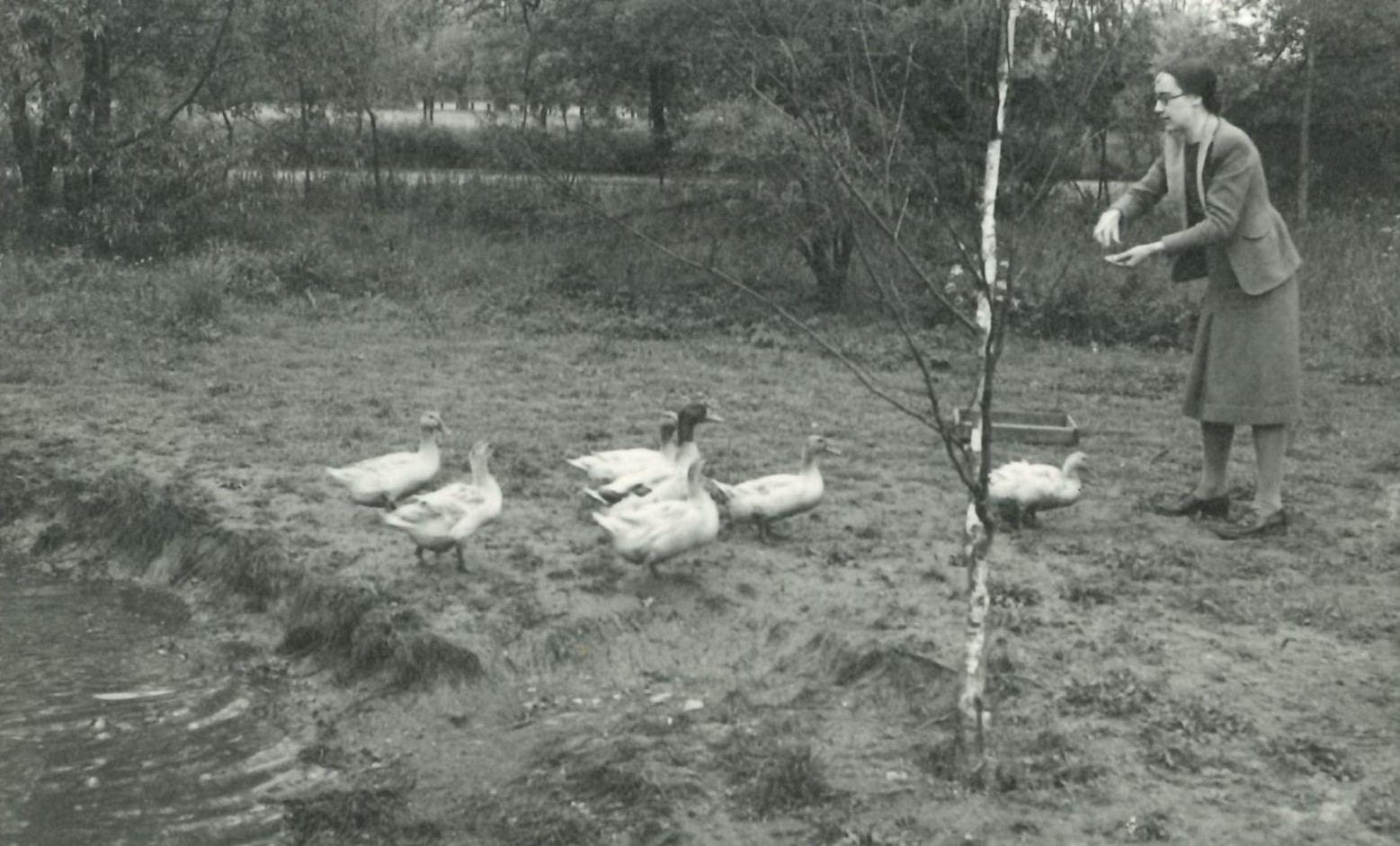 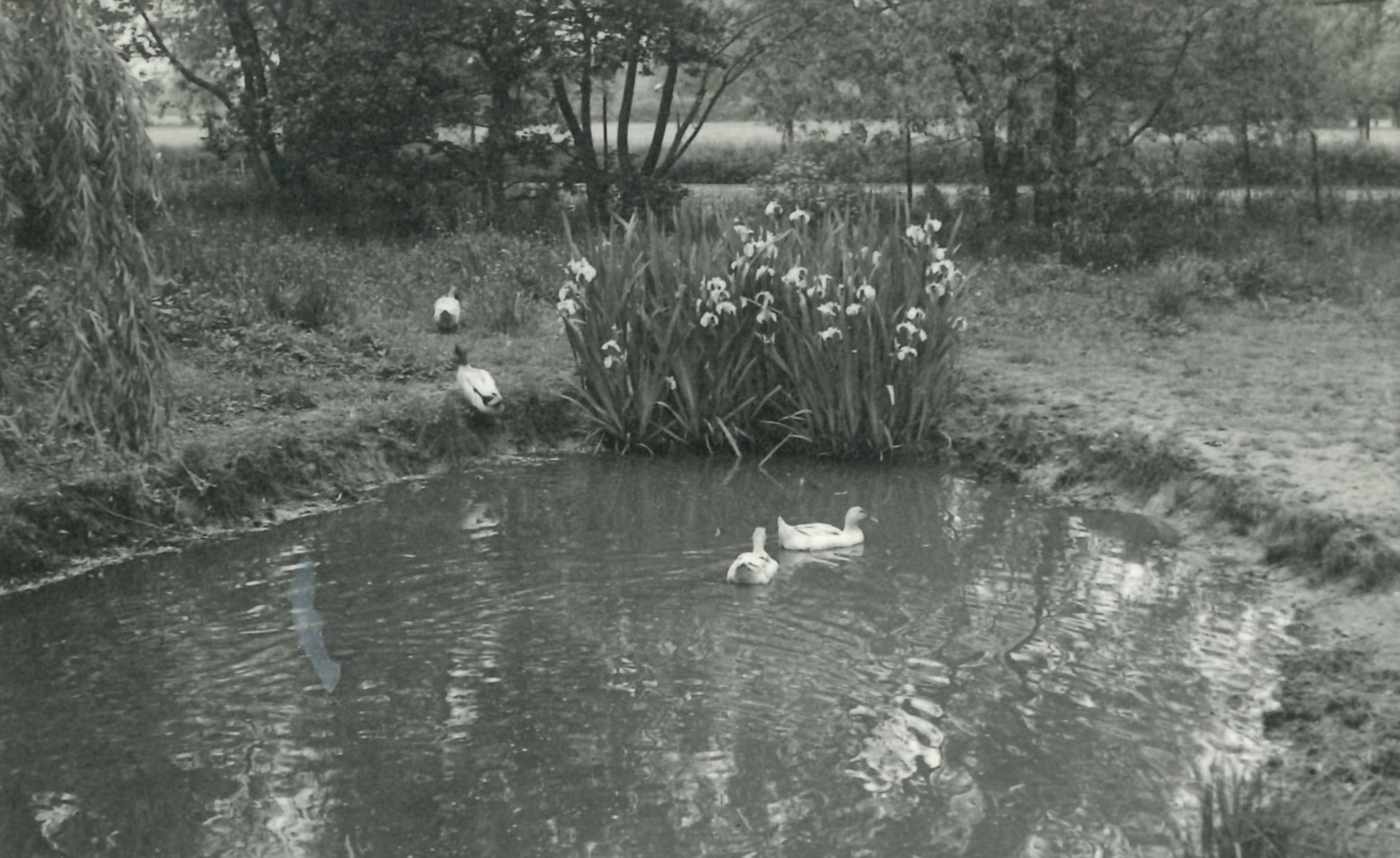 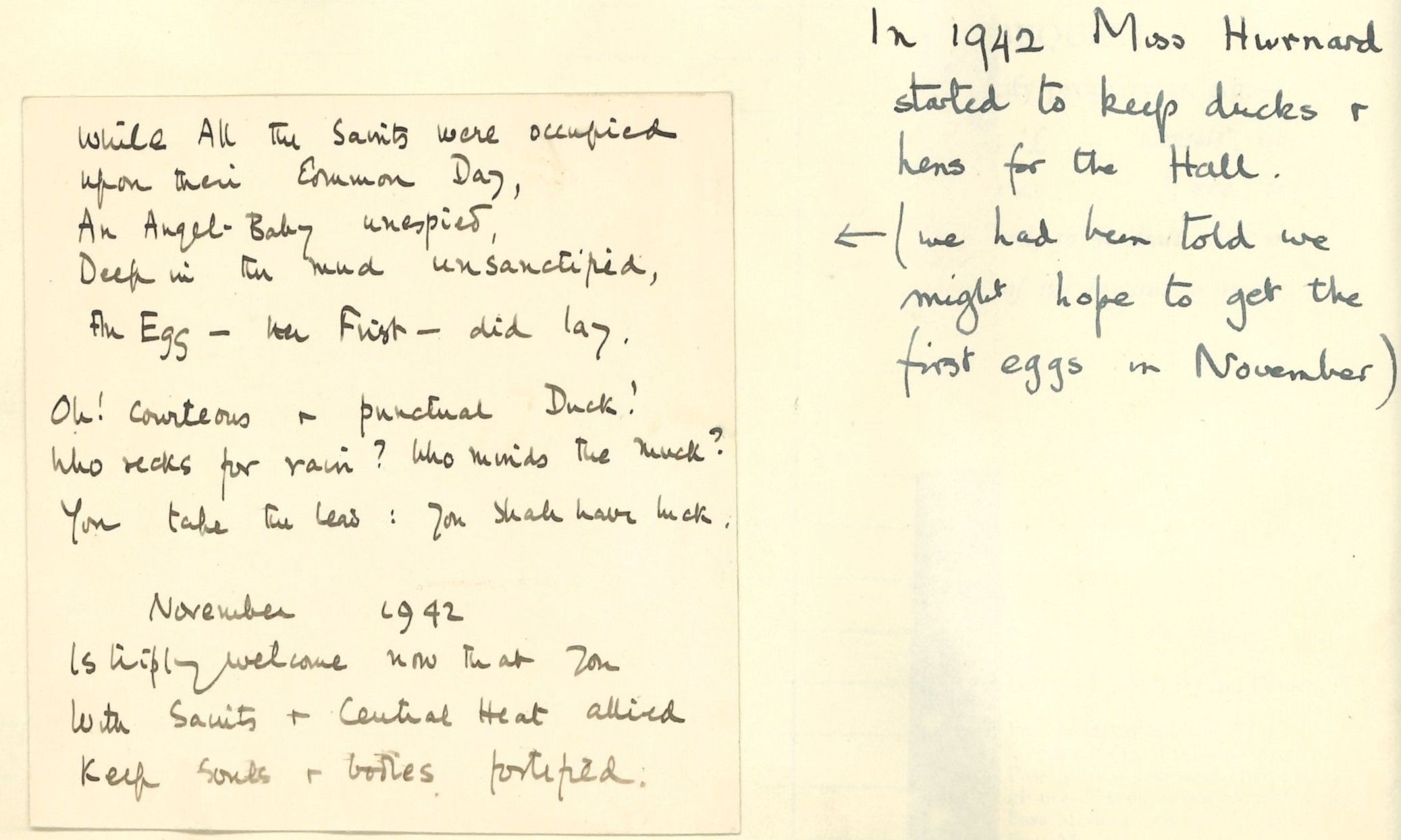 'While all the Saints were occupied / upon their Common Day, / An Angel-Baby unespied, / Deep in the mud unsanctified, / An egg - the First - did lay.

Oh! Courteous & punctual Duck! / Who recks for rain? Who minds the muck? / You take the leas: you shall have luck.

In 1942 Miss Hurnard started to keep ducks & hens for the Hall. (we had been told we might hope to get the first eggs in November)'

John Parkinson (1567-1650), was one of the great English writers who straddled the divide between the last herbalists and the first botanists; apothecary to James I and Royal Botanist to Charles I. His Theatrum Botanicum was published in 1640.  The illustrations were made by carving designs onto blocks of wood – a technique that created slightly simplistic and crude designs, which rapidly wore out when printed from. The wood used was boxwood, and the size of the boxwood branch presented a challenge for creating large illustrations. 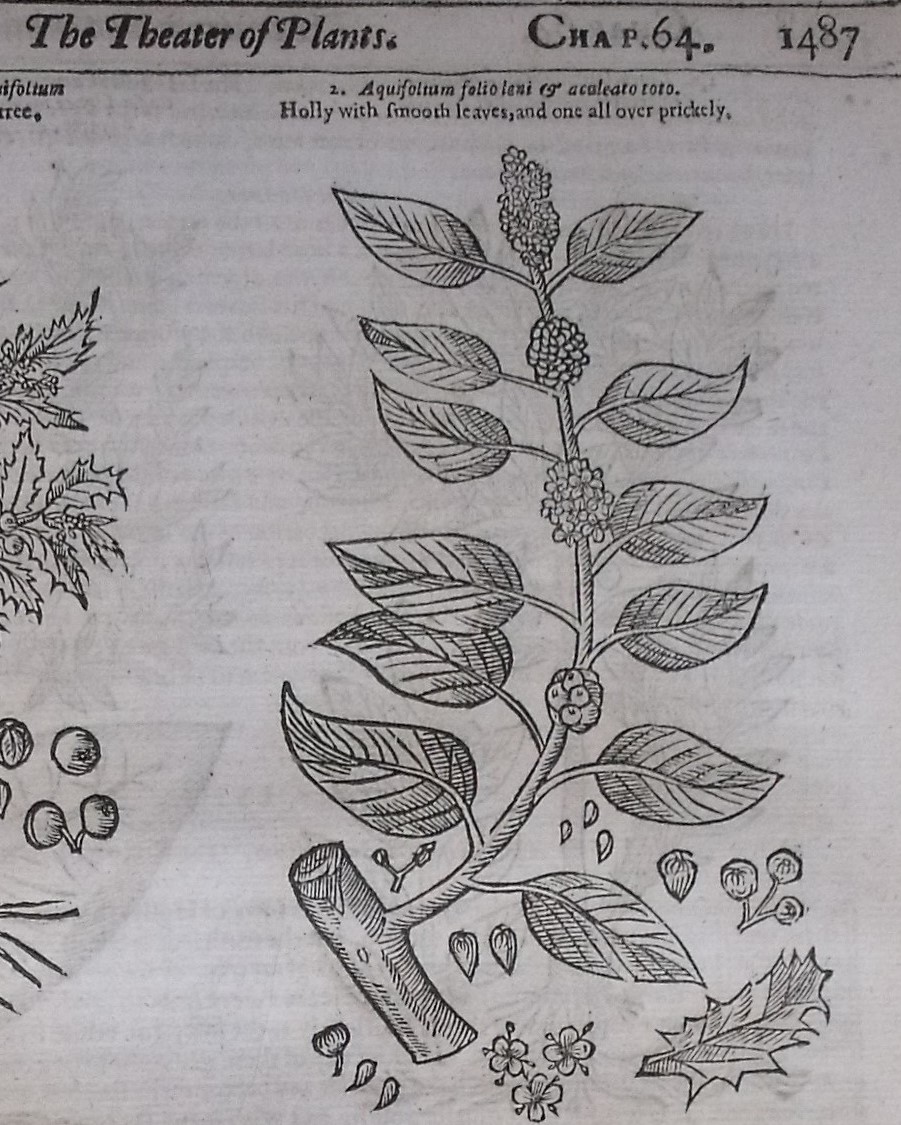 Our copy is the first edition, and is particularly interesting because it includes a large number of corrections done by an early owner, when the Latin classification of plants was in a state of flux. The original classification might seem arbitrary to today’s reader, with classes that include ‘sweete smelling plants’ and ‘hot and sharpe biting plants’. Numerous annotations in an 18th century hand update the names of the individual plants to conform with Carl Linnaeus’ classification system – here you can see that holly was originally called Agrifolium sive Aquifolium but the later annotation gives it the genus Ilex. We know the name of our careful annotator, Geo: Heyward, but sadly nothing else.

Carl Linnaeus was the Swedish biologist who formalised our current system of binomial nomenclature. His first expedition was to Lapland, and led to the publication of this work, first published in 1737. In it he described around 100 previously unidentified plants, and applied his new ideas about classification. In the frontispiece he can be seen wearing Sámi dress, surrounded by the flora and fauna of the region and Sámi on reindeer sledges. The plant in the bottom right corner is Twinflower, named by Jan Frederik Gronovius Linnaea borealis after Linnaeus. Linnaeus famously remarked:

‘Linnaea was named by the celebrated Gronovius and is a plant of Lapland, lowly, insignificant, disregarded, flowering but for a brief space — from Linnaeus who resembles it.’ 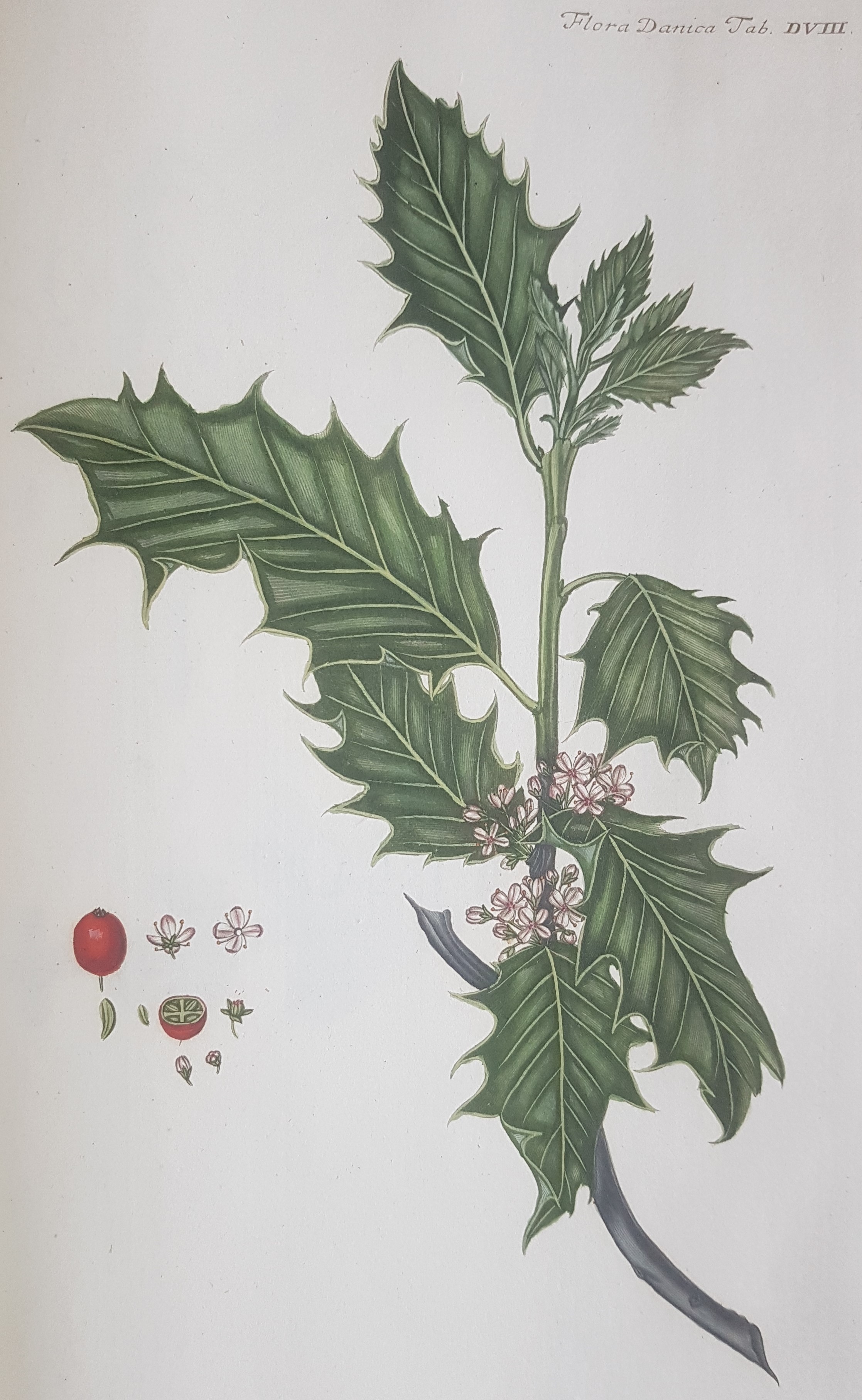 A product of the age of Enlightenment, the Flora Danica is a colossal encyclopaedia of botany which set out to faithfully represent all of the plants native to Denmark as faithfully as possible – aiming at life-size reproductions whenever possible. It was also one of the first major botanic publications to use the Linnaean naming system. Interestingly, the publishers of the Flora Danica wanted to use their work to educate the general public. For this purpose they sent copies to parishes across the country, at the same time hoping that readers would contribute their own knowledge of lesser-known native plant species. The illustrations here are made using copper plates, and richly hand coloured (whilst the edition sent to parishes was in black and white). Copper plates could be finer than woodcuts, and last longer.

Our library’s set was presented to LMH by John Ruskin (1819-1900), eminent art critic and early benefactor of the college. Ruskin was a strong supporter of education for women and, following his visit in 1884, donated a selection of books to the library that also included works by himself and by the 18th century novelist Maria Edgeworth. 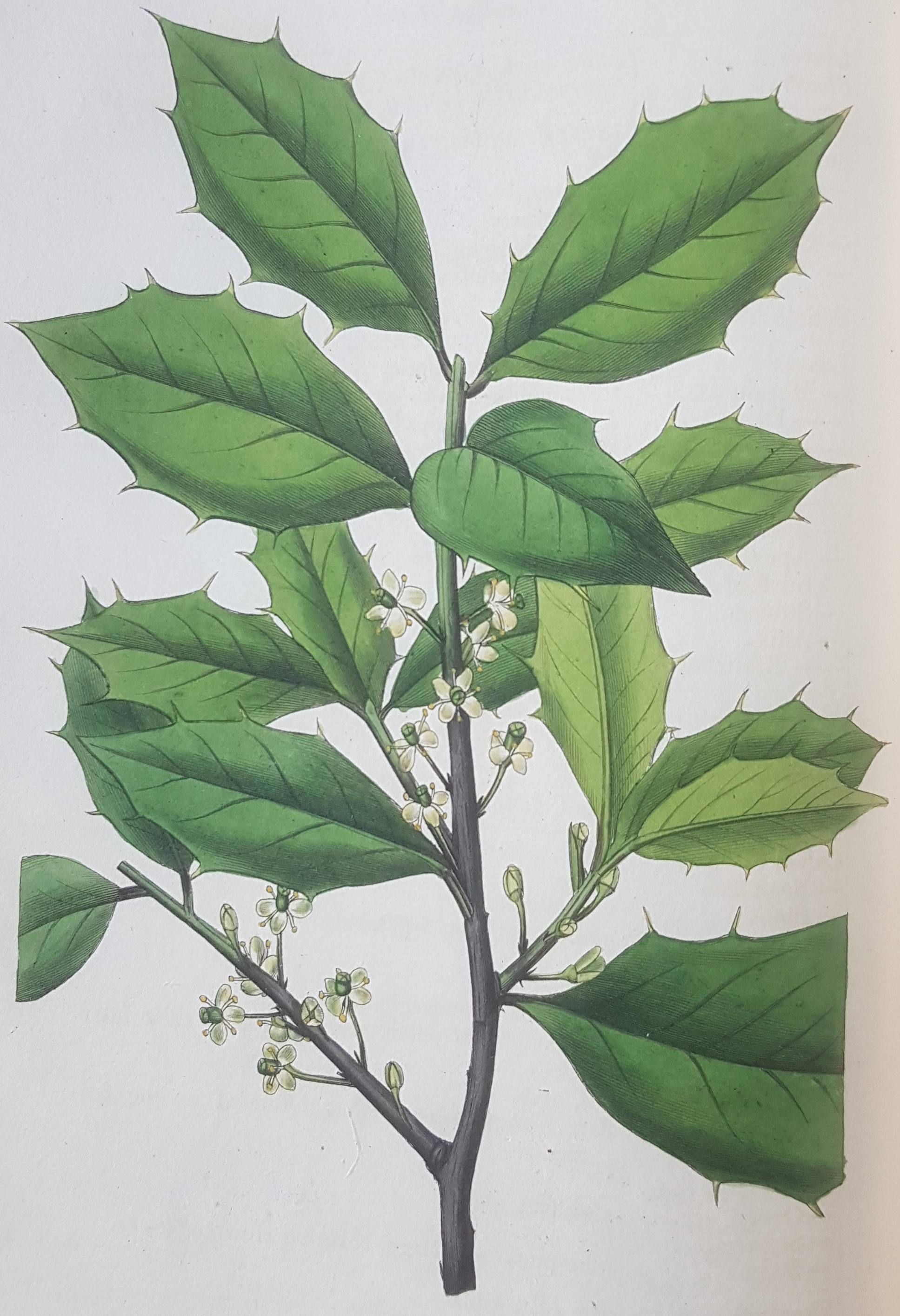 These books, although produced on a far less grand scale than the Flora Danica, shared the same basic techniques of hand-coloured metal plates. 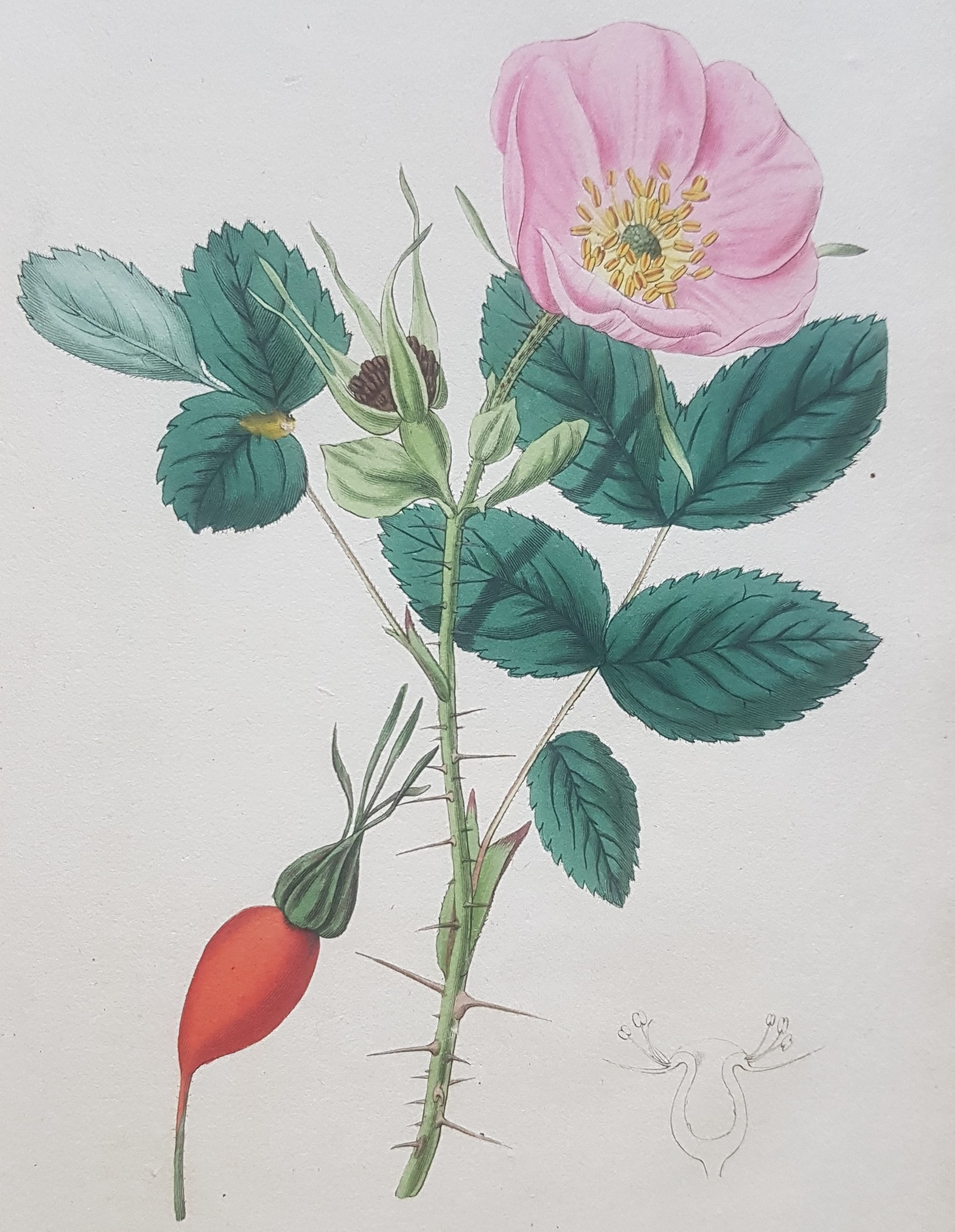 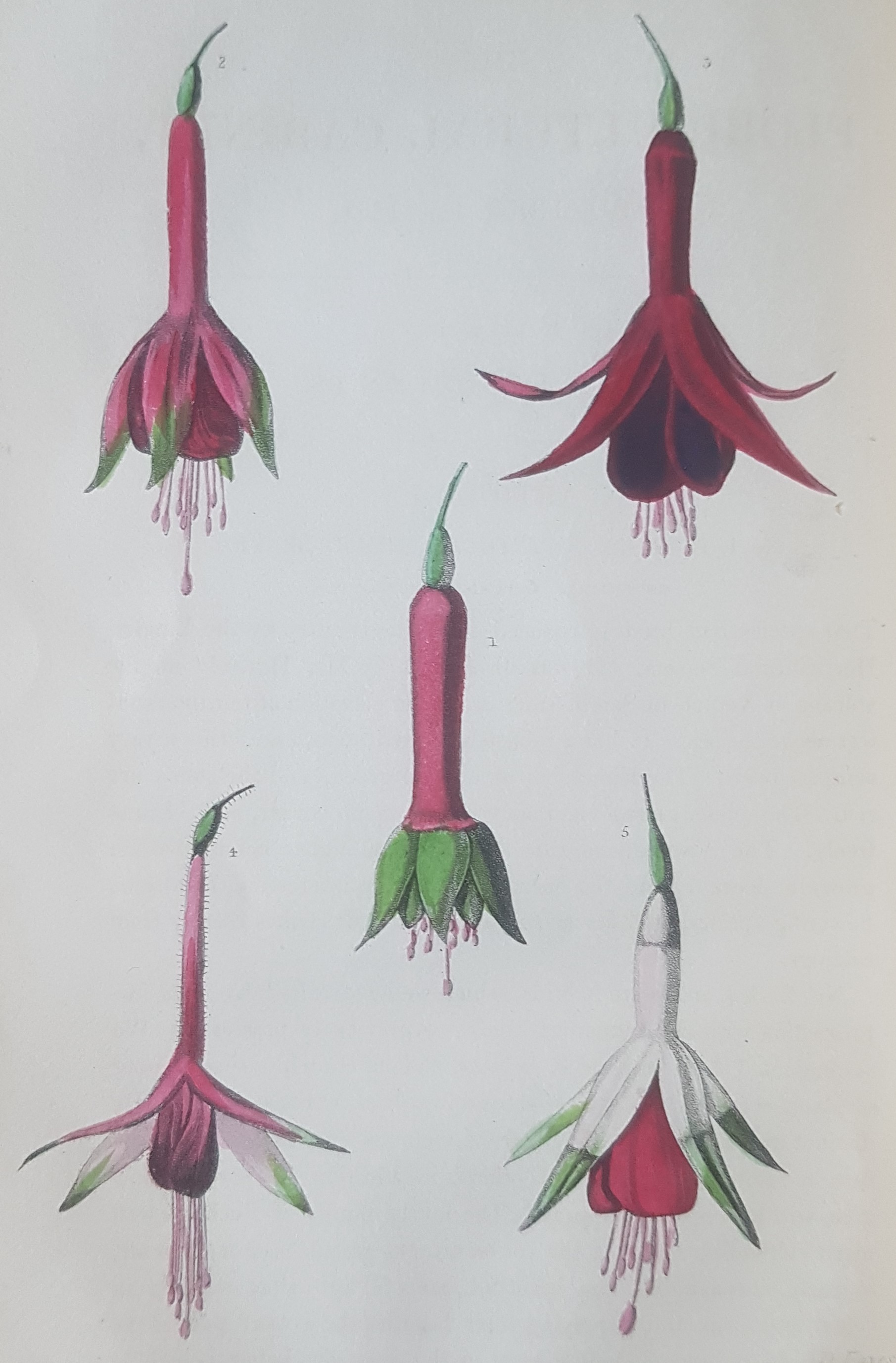 Steel plates replaced copper, whilst woodcut illustration received a revival thanks to electrotyping allowing the creation of copies of the original woodcut block. 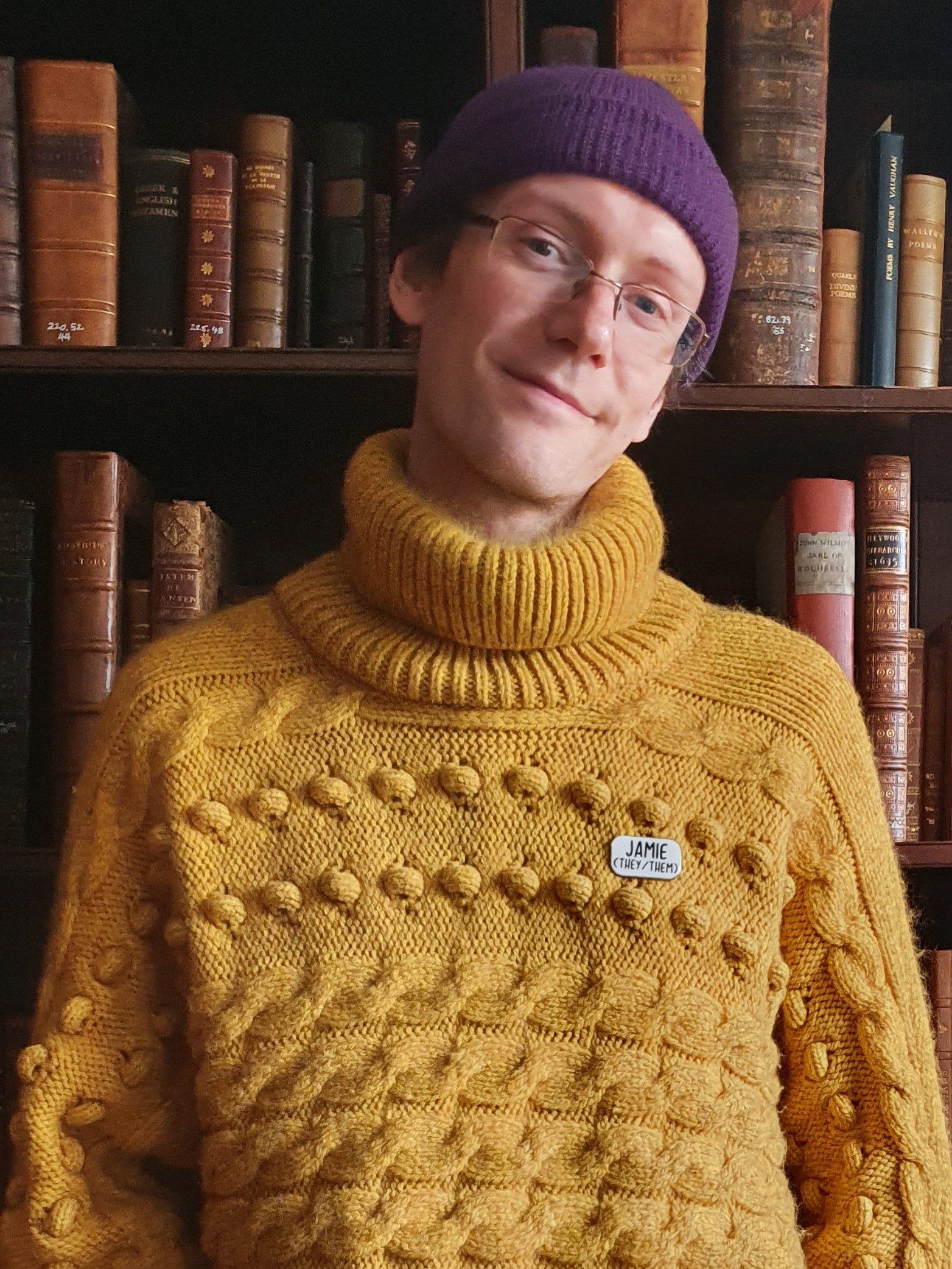