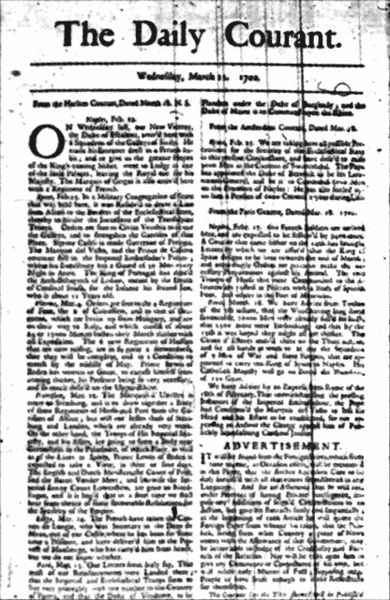 11 March 1702 issue of The Daily Courant, the first daily newspaper to be published in the United Kingdom.

Search SOLO for holdings of individual newspapers. The British Library also has a useful Newspaper catalogue where you search by location or place.

Not all early English newspapers in the Bodleian are catalogued on SOLO. Use the Milford & Sutherland to discover what is held.

A catalogue of English newspapers and periodicals in the Bodleian Library, 1622-1800 - by R. T. Milford and D. M. Sutherland. (Oxford, OUP, 1936) An annotated catalogue with details of newspapers which are not catalogued in SOLO. [LRR B1.1202]

Tip: how to best to find specific pre-1800 printed English newspapers in Oxford.

Check out Newspapers and other online news sources from the 17th – 21st centuries (LibGuide).