Visiting archives in Germany: a guide to discovering and using them: Movement archives

This guide is designed to help you finding your way through German archives and to enable you identifying exactly what you need for your research - quick and easy.
Subjects: German, History - General 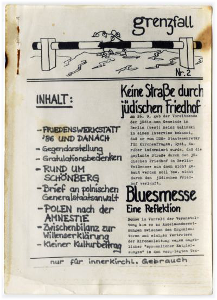 grenzfall no. 2, 1986
The institutions listed here are among the so-called “alternative archives“, or “archives from below”. They have been set up since the 1980s, usually due to private initiatives. They are concerned with social movements such as the Feminist or the Labour movement of the 19th century, but also newer ones such as the Anti-nuclear movement or the peace movement.