WWI literature is far from uniform, and is constituted by a range of responses to the conflict. Rupert Brooke’s patriotic ‘1914’ sonnet sequence became hugely popular in the early years of the war, with many Britons touched by the heroic sentiments of his poems. However, after years of devastating losses and with no clear resolution to the fighting, poets depicting the realities of warfare gained more recognition. Prominent among them was Wilfred Owen, a poet whose 'Anthem for Doomed Youth' pictured the war’s fallen 'd[ying] as cattle'.

The English Faculty Library is home to the Wilfred Owen Collection. The collection consists of Owen's own library, together with manuscripts, photographs, letters and an almost complete set of The Hydra, the journal of the Craiglockhart War Hospital. Siegfried Sassoon’s inscribed copy of The Old Huntsman is also among the collection, which is still arranged as it was upon Owen's death in 1918. For those unable to visit, much of the material has been digitised, and can be viewed via the First World War Poetry Digital Archive.

A manuscript of Owen's 'Anthem for Dead Youth' (belonging to the English Faculty Library) was selected among the Treasures of the Bodleian in 2011. Along with several other of his poems, this was written whilst Owen was recovering from shell shock. He was encouraged by fellow patient and poet Siegfried Sassoon. In this draft, the poem has yet to be given its final title, ‘Anthem for Doomed Youth’. 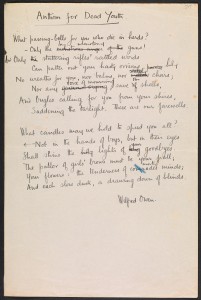 The British Library has digitised excerpts from Ford Maddox Ford's On Heaven and Poems written on Active Service (1918). The majority of the poems in this collection were written whilst Ford (formerly Ford Madox Hueffer) was serving in France. At the beginning of the war he was recruited, along with a number of other famous writers, to work at the War Propaganda Bureau. However, despite being over 40 he decided to enlist, joining the Welch Regiment in 1915. In turn, he saw action at the battles of the Somme and Ypres. It was Ford's experience of both the Front and army life which inspired his poetry and the four novels which make up his masterpiece of the First World War, Parade’s End (1924-28). On Heaven opens with his most famous war poem, ‘Antwerp’, which describes the bravery of Belgians as they tried to defend themselves against the German invasion. 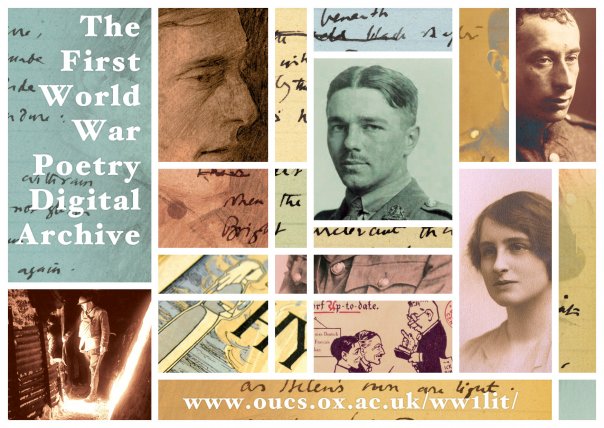 The First World War evoked a surge in literary output, which included poems, novels and drama. Whilst the poetry of Siegfried Sassoon, Rupert Brooke and Wilfred Owen immediately springs to mind, works by by Ivor Gurney, Edward Thomas, Charles Sorley, David Jones and Isaac Rosenberg are also widely anthologised. Much of the literature written during and about the war was authored by men, largely because of the conflict's impact on their generation. However, a number of women (especially in the British tradition) also created literature about the war, often observing the effects of the conflict on soldiers and the Home Front.

The First World War Poetry Digital Archive, a resource hosted by the University of Oxford and funded by the Joint Information Systems Committee (JISC), is an online repository of over 7000 items of text, images, audio, and video for the purposes of teaching, learning, and research, and is an authority on the study of WWI and the literature that it inspired. The archive consists of collections of highly valued primary materials from major poets of the period, including Wilfred Owen, Isaac Rosenberg, Robert Graves and Edward Thomas. This is supplemented by a separate archive of over 6,500 items contributed by the general public, and a range of multimedia artefacts from the Imperial War Museum. These include a selection of oral history resources; online access is provided to approximately 150 audio extracts from interviews conducted with WWI veterans, their families, and those who served on the Home Front. Should researchers be interested in hearing the full recordings, these can be accessed via the Imperial War Museum Sound Archive.

The British Periodicals 1681-1939 database (accessed via SOLO) is a useful resource for contextualising literary developments during WWI. It provides access to the searchable full text of hundreds of periodicals from the late seventeenth to the early twentieth century, comprising high-resolution facsimile page images. Topics covered include literature, philosophy, music, art and drama, all of which may help shed light on the cultural climate between 1914-1918. 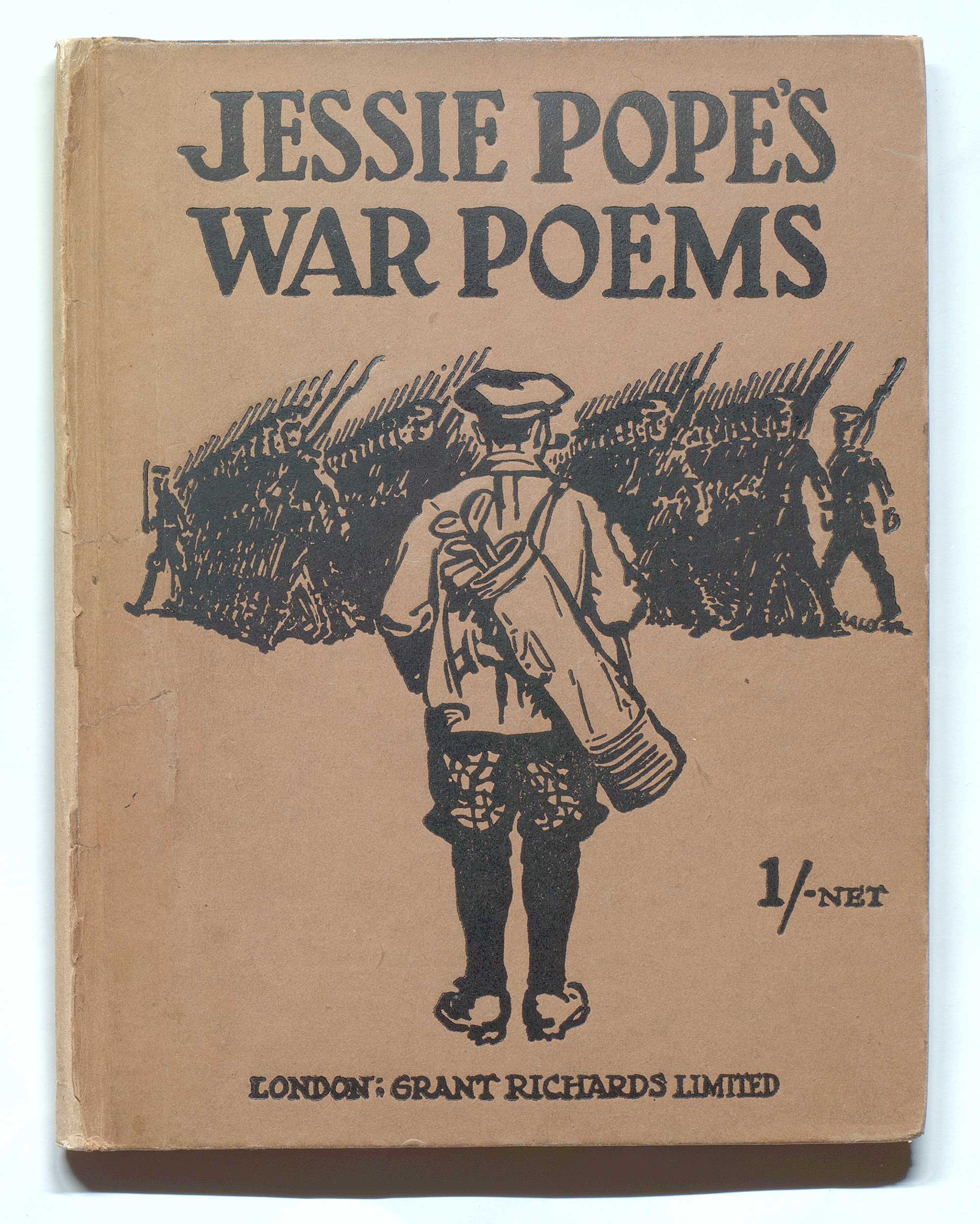 Before the war Jessie Pope had been a successful writer of comedy verse, and a prolific contributor to newspapers and magazines. Her pro-war poems were originally published in the Daily Mail as a rallying cry to encourage enlistment, and whilst today they are considered jingoistic, her views were very popular at the time. Pope's material contrasts greatly with the brutal imagery of the later war poets such as Owen and Sassoon, and can be compared more readily with the idealism expressed in the work of Rupert Brooke. Whilst researchers can view her poems on site, the British Library has also digitised excerpts from Jessie Pope's War Poems (1915), which are available via its World War One collection items.

The Times Literary Supplement Historical Archive 1902-2013, accessible via SOLO, is a fully-searchable digital resource through which the cultural trends of the last 100 years can be researched. It provides opportunities for tracking the views of influential opinion-makers, the responses of their peers, the controversies of the day and how they developed, and is undoubtedly of much use to those researching the wave of literature emergent during WWI. More than 250,000 reviews, letters, poems and articles in more than 5,000 issues of the TLS are available to search. 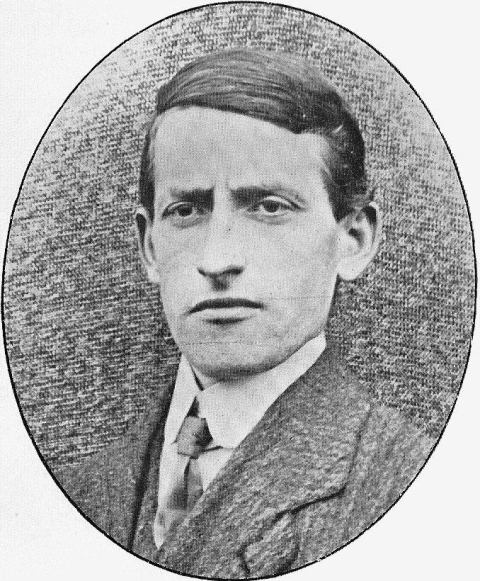 The Library and Archives at Bangor University, Wales, are in possession of the Hedd Wyn manuscripts. Ellis Humphrey Evans, a poet better known as Hedd Wyn (his bardic name) enlisted in the 15th battalion, the Royal Welch Fusiliers in 1917. He had already started on his composition for the National Eisteddfod in Birkenhead entitled Yr Arwr, and completed the awdl in camp at Litherland. However, when it was announced in the chairing ceremony that Hedd Wyn was that year's winner, it was also revealed that he had been killed at the battle of Pilkem Ridge on 31 July.

The war had a profound impact on Hedd Wyn's work, resulting in some of his most noted poetry, including Plant Trawsfynnydd ('Children of Trawsfynnydd'), Y Blotyn Du ('The Black Dot'), and Nid â’n Ango ('[It] Will Not Be Forgotten'). Rhyfel ('War'), written shortly before Wyn's death, remains one of his most frequently quoted works: 'The harps to which we sang are hung,/ On willow boughs, and their refrain is/ Drowned by the anguish of the young/ Whose blood is mingled with the rain.' The manuscripts held at Bangor include a selection of Hedd Wyn's writing, 1906-1917, as well as material that he sent to his sweetheart. There is also a typescript collection of his poetry, unpublished.

Although Gilbert Chesterton considered himself primarily a journalist, he also contributed to other literary genres. Middle- aged at the beginning of WWI, he spent his war service at the War Propaganda Bureau. During this time he wrote much poetry, including the epic 'Lepanto', which recounts one of the great sea battles of the crusades - the mood of which channeled into public consciousness. Whilst Chesterton's war poetry does not describe trench warfare or the conditions endured by soldiers, it nonetheless made a significant impact. ‘The Wife of Flanders’, for example, is a moving account of the loss and devastation brought by war, and is much anthologised in collections of war poetry. Excerpts from Chesterton's poetry (including the aforementioned) have been digitised by the British Library, providing an interesting point of comparison with the works of the poets who saw active military service.