Not all legal disputes in Ireland are settled in courts by judges. The Irish Constitution allows the Oireachtas  to pass legislation to establish tribunals with limited powers to decide cases and investigate certain matters of public importance..

The legislation states whether the tribunal should be held in public or in private - most tribunals are held in public so that any member of the public can attend. A tribunal dealing with sensitive issues may be held in private, for example, the Refugee Appeals Tribunal holds private hearings.

There is a wide range of tribunals with different functions in the State. There are rights tribunals and there are tribunals of inquiry. A rights tribunal acts like a court; it makes binding decisions on disputes between different parties and is set up to provide a quick, informal and inexpensive alternative to the courts system in a specific area of law, for example, employment law. A tribunal of inquiry has a different function; it simply investigates a specific matter of public importance and submits a report to the Oireachtas setting out its findings of fact. Significant costs have arisen in recent years with regard to tribunals of inquiry. The Comptroller and Auditor General published a Special Report into Tribunals of Inquiry (pdf) in December 2008. The Report gives an estimate of the costs involved in the Mahon, Moriarty and Morris tribunals.

These tribunals are not permanent, but are set up with powers to investigate specific matters. They are usually chaired by judges or senior lawyers. At the end of the investigation, the tribunal submits a report to the Oireachtas, which may contain recommendations.

Article 34.1 of the Constitution states that 'Justice shall be administered in Courts established by law'. The Constitution outlines the structure of the court system as comprising a court of final appeal, the Supreme Court, and courts of first instance which include a  High Court with full jurisdiction in all criminal and civil matters and courts of limited jurisdiction, the Circuit Court and the District Court organised on a regional basis.

Below is the Court Structure for Ireland (taken from the Court Service of Ireland website). 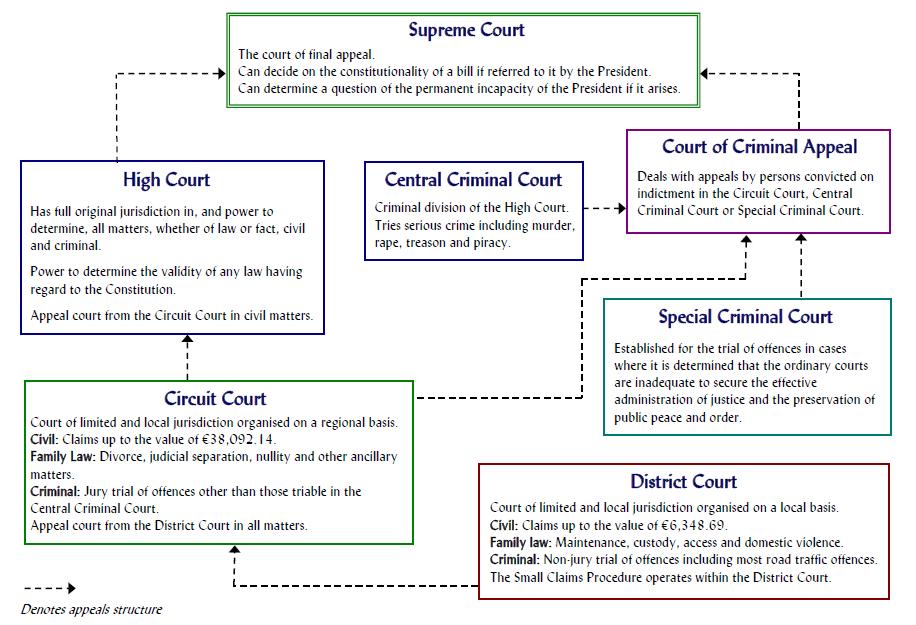