Nineteenth Century Collections Online  is a global digitization and publishing program focusing on primary source collections of the long nineteenth century. The content is sourced from the world's preeminent libraries and archives. It consists of monographs, newspapers, pamphlets, manuscripts, ephemera, maps, photographs, statistics, and other kinds of documents in both Western and non-Western languages.

The collections you'll find included in the database are:

Featuring a wide range of primary sources related to the arts in the long nineteenth century, from playbills and scripts to operas and complete scores. These rare documents, many of them never before available, are sourced from the British Library and other institutions. Curation is by experts in British arts history. Covering more than a century, and encompassing both the Georgian and Victorian theatre, British Theatre, Music, and Literature is without equal as a resource.

The collection provides a detailed look at the state of the British art world and includes manuscripts and musical compositions as well as documents such as personal letters, annotated programs, meeting minutes, and financial records. It offers scholars an unmatched glimpse into the inner workings of the world of the arts in Britain.

Including a wide array of primary source documents—serials, books, manuscripts, diaries, reports, and visuals—Women: Transnational Networks focuses on issues at the intersection of gender and class from the late-eighteenth century to the era of suffrage in the early-twentieth century, all through a transnational perspective. Source libraries include the Library of Congress, the London School of Economics and Political Science Library, and the Library of the Society of Friends.

This collection provides access to thousands of items selected from the John Johnson Collection of Printed Ephemera, offering unique insights into the changing nature of everyday life in Britain in the eighteenth, nineteenth and early twentieth centuries. Categories include Nineteenth-Century Entertainment; the Booktrade; Popular Prints; Crimes, Murders and Executions; and Advertising.

For a demo of how to use the John Johnson Collection please go to: http://johnjohnson.chadwyck.co.uk/help

Victorian Popular Culture contains a wide range of source material relating to popular entertainment in America, Britain and Europe in the period from 1779 to 1930, and shows how interconnected these worlds were. It is comprised of 4 separate sections: Spiritualism, Sensation and Magic, Circuses, Sideshows and Freaks, Music Hall, Theatre and Popular Entertainment, Moving Pictures, Optical Entertainments and the Advent of Cinema. 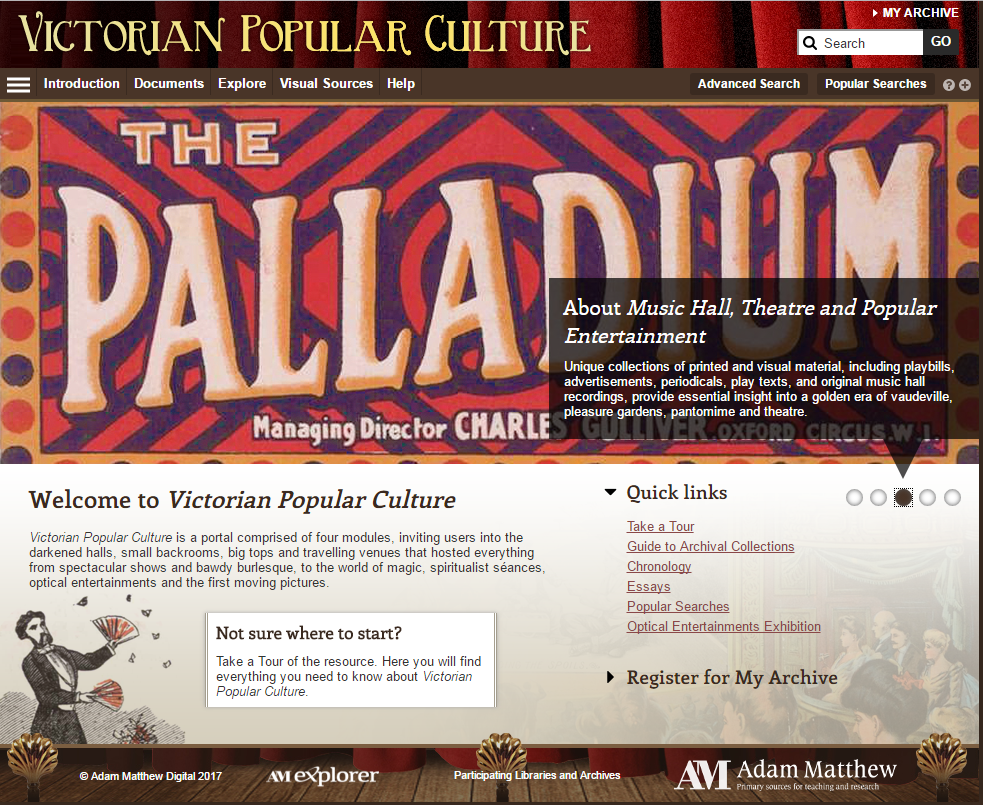